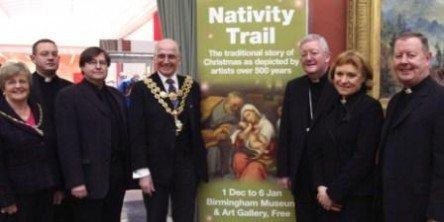 The Nativity Trail, the traditional story of Christmas as depicted by artists over 500 years, was warmly commended during the official launch by the Most Reverend Bernard Longley, Archbishop of Birmingham, on Tuesday 30 November.

Speaking less than 11 weeks since the visit of Pope Benedict XVI to Birmingham, Archbishop Bernard Longley said: “As my second Christmas in Birmingham approaches I am delighted that the Birmingham Museum & Art Gallery have once again devised a Nativity Trail. This year it includes the beautiful mosaic image of the Madonna and Child which was Pope Benedict’s gift to St Mary’s College at Oscott.”

The Archbishop of Birmingham added: “The Nativity Trail helps people to follow the story of Christ’s birth and also unfolds its deeper meaning in our own lives. The mosaic reminds us of the contribution that people of all faiths are making to the well-being of the City of Birmingham.”

Among the civic dignitaries present were the Lord Mayor of Birmingham, Councillor, Len Gregory and the Lady Mayoress, Mrs Gill Gregory, Councillor Alan Rudge, who coordinated the Papal Visit to Cofton Park on behalf of Birmingham City Council, together with Canon Catherine Ogle, Dean of St Philip’s Anglican Cathedral, and Father Richard Duffield, Provost of the Birmingham Oratory and Postulator of the Newman Cause.

A number of Primary School choirs from around Birmingham, including Christ the King, Kingstanding, entertained the visitors with a selection of popular carols.

Visitors to Birmingham Museum & Art Gallery will also have the opportunity to see a superb display of photographs documenting the visit of Pope Benedict XVI to Birmingham on Sunday 19 September 2010 for the beatification of Blessed John Henry Newman at Cofton Park. Also on show (Gallery 28) is the specially reupholstered chair used by Pope Benedict during his visit to St Mary’s College Oscott, the diocesan seminary.

Following his recent appointment as Dean of the Metropolitan Cathedral and Basilica of St Chad, Birmingham, Father Gerry Breen, said: “How encouraging that so many religious and civic leaders gathered together for this initiative focusing on the true meaning of the Season, the Birth of Christ. In keeping with the City of Birmingham motto, I look ‘Forward’, to working with both the Civic and Religious Leaders for the benefit of all the people of our proud City.”

*The Nativity Trail is open to the public at Birmingham Museum & Art Galley from 1 December 2010 until 6 January 2011. Admission is free.