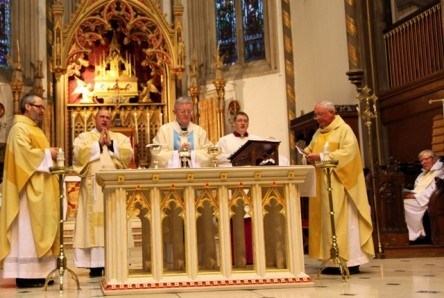 Archbishop Bernard Longley presided and preached at a special Votive Mass of Our Lady of Lourdes in the Metropolitan Cathedral and Basilica of St Chad, Birmingham, on Saturday 12 February.

During his homily at the Mass for World Day of Prayer for the Sick, and the Birmingham Lourdes Hospitalité, the Archbishop of Birmingham said: “Those who have been on pilgrimage to Lourdes will know what a special place it is. You cannot be authentically Catholic and not be aware of Mary, the Mother of Jesus, on your pilgrim way.”

Amongst those in the congregation was Mr Jim McManus, Director of Public Health for Birmingham, who has been awarded ‘The Good Samaritan Medal’, the Vatican’s highest medal for healthcare.

After Mass Archbishop Bernard Longley said: “I am delighted that the Holy See has honoured Jim McManus with the ‘The Good Samaritan Medal’. He richly deserves this in recognition of his healthcare advisory work for the Church at national level.

The Archbishop of Birmingham added: “Jim also makes a great contribution to the life of the Archdiocese of Birmingham and his many friends will rejoice with him as he receives this rare award.”

Mr Jim McManus said: ” I feel very privileged to both work in healthcare and volunteer for the Church on healthcare issues, and I hope to continue serving in this way. I had no idea this award was going to be made, but receiving it gives me an opportunity to renew my commitment to do this.” He added: “The Church throughout its history has made a major contribution to healthcare.”

This prestigious award was made to Jim McManus in Rome at the end of a meeting of the Vatican’s Pontifical Health Care Workers by its President, Archbishop Zygmund Zimowski, on the Feast of the Presentation, 2 February.

‘The Good Samaritan Medal’ is awarded by the Holy See to: “Those who serve the sick and suffering in an exceptional way.” Previous recipients include Sir Alexander Fleming.