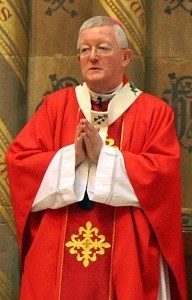 The Most Reverend Bernard Longley, Archbishop of Birmingham, said in a statement today, Wednesday 10 August: “With my fellow citizens I am shocked and greatly saddened by the destruction and looting in Birmingham’s city centre and in Handsworth.

“I ask the Catholic community to pray, especially for all those whose livelihood or property has been damaged.

“We also pray for a strengthening of family values and guidance, and for a change of heart among those involved.”

Archbishop Longley added: “Blessed John Henry Newman cared for the poor and needy of Birmingham. As we recall the anniversary of his death – tomorrow, Thursday 11 August – we ask for his prayers for the people of Birmingham and for all our citizens.
We also pray for all the cities and towns in our Archdiocese of Birmingham, especially West Bromwich and Wolverhampton.”