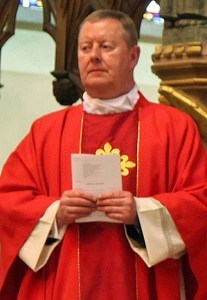 Catholics throughout the Roman Catholic Archdiocese of Birmingham been called to pray in a special way for Birmingham following the outbreak of lawlessness in the city during the night of Monday 8 August.

Canon Gerry Breen, the Dean of the Metropolitan Cathedral and Basilica of St Chad, Birmingham, whose parish includes areas of the city centre affected, said in a statement the following afternoon: “All people of good will are dismayed at the current unrest on our streets. It is important for us, particularly Faith Leaders and our communities, to continue to work and pray together for our great City and the welfare of its citizens. At times like this we stand that much closer together.

“We are encouraging our congregations to pray for those whose homes and livelihoods are directly affected. Also to keep in mind the members of the Emergency Services on whom we turn to for help on any day or night of every week.

“As people of faith, we must pray also for the youngsters who are misled by others or misguided in their thinking who are being swept along on this wave of criminality.”

Canon Breen added: “Thursday 11 August marks the anniversary of the death of Blessed John Henry Newman in 1890. He ministered as a priest in the heart of our City to the disadvantaged and the poor, regardless of creed or culture.

“I encourage Catholics, in particular, to seek his intercession in prayer.

“As Pope Benedict XVI reminded us when quoting John Henry Newman during his homily at the Mass of Beatification at Cofton Park, here in Birmingham, just last September: ‘Prayer is the practise of turning to God in every season, in every place, in every emergency.’

“May Blessed John Henry Newman intercede for our City and its people.”

Canon Breen and his counterpart the Very Reverend Catherine Ogle, the Dean of St Philip’s Anglican Cathedral, Birmingham, situated in the heart of the city have excellent ecumenical relations and work together for the good of all Christian traditions and religious faiths in Birmingham.