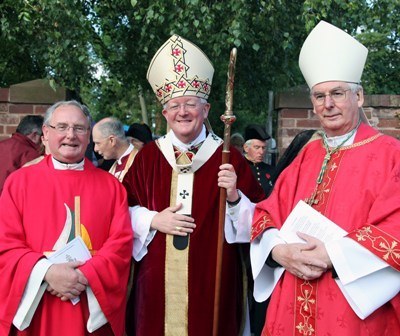 Archbishop Bernard Longley, Archbishop of Birmingham, was the Principal Celebrant and Preacher at Mass during the annual pilgrimage to the Shrine of the English Martyrs at Harvington Hall, Kidderminster, Worcestershire, on Sunday 4 September.

The Elizabethan manor-house was built by Humphrey Pakington (1555-1631) a courtier from the household of the Lord Chancellor Ellesmere, who managed to practice his Catholic faith in secret during a time of great persecution. Harvington Hall has the finest surviving series of priest-holes anywhere in the country and during Elizabethan times offered shelter to many recusant priests.

Several hundred pilgrims and priests from parishes throughout the Archdiocese of Birmingham were present on the lawn on a glorious early September afternoon. The blue sky, warm sunshine, the backcloth of trees and the old manor-house added to the occasion.

Red vestments in honour of the English Martyrs were worn by Archbishop Bernard Longley; Bishop Philip Pargeter, retired Auxiliary Bishop of Birmingham; Mgr Canon John Moran, Vicar General of the Archdiocese of Birmingham since 1998, and Parish Priest of St Mary’s Harvington since 2008; and Fr Douglas Lamb, Parish Priest of St Ambrose, Kidderminster. More than 15 other priests also concelebrated including Canon Gerry Breen, Dean of the Metropolitan Cathedral and Basilica of St Chad, Birmingham.

The four martyrs especially venerated at Harvington, who worked at various times in the area, are: St John Wall – hung, drawn and quartered at Red Hill, Worcester on 2 August 1679, and canonised in 1970; St Nicholas Owen – died under torture in the Tower on 2 March 1606, and was canonised in 1970; Bl. Edward Oldcorne – executed at Red Hill, Worcester on 7 April 1606 and beatified in 1929; and Bl. Arthur Bell – executed at Tyburn on 11 December 1643 and beatified in 1987.

During his homily Archbishop Bernard Longley said: “I am delighted to join you for the second time on pilgrimage to Harvington to honour the memory and witness of the English Martyrs of our diocese and especially those associated with this beautiful place. When I was last here on pilgrimage we were all making our last-minute preparations for the visit of Pope Benedict XVI to the United Kingdom and to Birmingham for the Beatification of Blessed John Henry Newman.”

Archbishop Longley stressed: “The witness of the martyrs here at Harvington Hall is an inspiration to all of us. When we reflect on their courage and loving steadfastness in the face of opposition and menace we are moved to make apology to our Lord for the comparative weakness of our own faith. Today’s pilgrimage isn’t only a lovely day-out, but it fires us again with enthusiasm for the mission that Christ has entrusted to us in our own time, just as the Holy Father’s visit and example have given us fresh courage to follow and serve our Lord.”

He said: “The prayers of our pilgrimage at Harvington contributed to the remarkable blessings that have been the lasting legacy of the papal visit. For Catholics our sense of identity and unity were strengthened and we saw the Holy Father’s spiritual leadership widely recognised by people of all faiths and of none. Other Christians and people of faith welcomed the emphasis placed by Pope Benedict on the vital contribution that we can and do make to the common good of all.”

At the conclusion of his homily Archbishop Bernard Longley paid a warm tribute to Mgr John Moran on his last day as Vicar General. The Archbishop said: “I want to thank him again, in the midst of his own parishioners and all of us on pilgrimage for his devoted service to the clergy and people of the Archdiocese as VG over these last thirteen years.

“Mgr John has exercised his demanding ministry as VG with dedication and above all by example. In this way we have witnessed the qualities of his generous character and the many talents that have enabled him to achieve so much for the sake of the Kingdom of God,” he said.

Archbishop Longley added: “I know how much Mgr John has been looking forward to dedicating his time to the parish community here at Harvington and how greatly supported he has felt by the people of this parish.”

The Archbishop of Birmingham announced that he had appointed Fr Timothy Menezes, Parish Priest of St Thomas More Coventry since 2004, as his new Vicar General, as from Monday 5 September 2011.