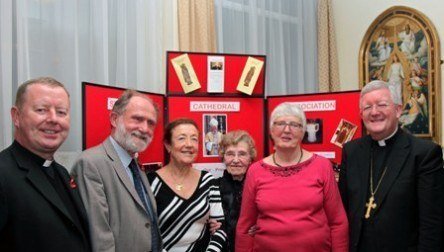 Archbishop Bernard Longley, President of St Chad’s Cathedral Association, has warmly commended the work of the Association and the valuable contribution it makes to the Metropolitan Cathedral and Basilica of St Chad, Birmingham.

The Archbishop of Birmingham, the principal guest, was speaking during the eighth Annual Dinner of the Association, held in the Canons’ Dining Room, at Cathedral House, on Friday 11 November 2011.

Among more than 40 members and guests present was Mrs Margaret Mayhew from Stratford-upon-Avon, in the Archdiocese of Birmingham, who will celebrate her hundredth birthday during 2012. Mrs Mayhew is a niece of Archbishop Thomas Williams, the third Archbishop of Birmingham, who died on 1 April 1946. She attended his Funeral Mass held in the Crypt of St Chad’s Cathedral.

After an excellent and well-served meal, guest speaker Mrs Patro Mobsby, gave a fascinating talk, illustrated with slides: about her 760km Camino Walk from Roncesvalles in the Pyrenees to Santiago de Compostella in Galicia in north-west Spain.

Mrs Mobsby shared some of the thoughts and feelings she had during her pilgrimage to the Cathedral and shrine dedicated to the Apostle St James.

It was a most enjoyable and convivial evening.

During 2012 the St Chad’s Cathedral Association will play an important role during the year-long special celebrations to mark the bicentenary of the birth of Pugin on 1 March 1812.

The first events will be held in St Chad’s Cathedral during March 2012 to coincide with the anniversary of Pugin’s birthday, and the Feast of St Chad, Bishop of Lichfield, the following day, 2 March.

*Anyone who is interested in joining the St Chad’s Cathedral Association should contact the Hon Secretary, Mr David Symonds. Email: david.dsace@blueyonder.co.uk