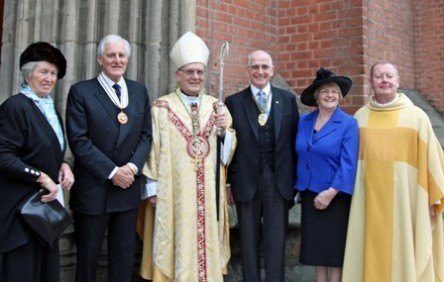 “At the very least we must concede that the demonstrations outside St Paul’s Cathedral in London and in the financial centres of North America, highlight the debate that is to be had concerning the power of wealth and the competing claims of the individual’s right to a just and equitable distribution of wealth in the world,” said the Right Reverend David McGough, Auxiliary Bishop of BiBishop David McGough, Auxiliary Bishop of Birmingham, pictured during the Civic Mass, at St Chad’s Cathedral, Birmingham, on Sunday 20 November 2011.rmingham, on Sunday 20 November 2011.

Bishop David McGough, Provost of the Metropolitan Chapter, was speaking during his sermon at the Annual Civic Mass at the Metropolitan Cathedral & Basilica of St Chad, Birmingham, on the Solemnity of Christ The King.

Bishop McGough emphasised: “To proclaim Christ as King must surely begin a debate about power. All kingdoms, be they ancient or modern are in some ways about power. At the level of civil life the institution of this Feast was intended to lead to a debate about the powers that hold sway in our society.

“Of equal importance, at the level of the individual, are questions about the attitudes and values that have the power to rule our hearts, to rule our consciences.

“While it is easier to ask the question than to provide the answers, those who are entrusted with the governance and justice of our society, can never ignore these qCanon Gerry Breen, Cathedral Dean, pictured during the procession before the Civic Mass, at St Chad’s Cathedral.uestions.

“In terms of today’s Feast Day, Christ the King, we must ask how these competing powers are to be balanced for the benefit of society.”

Bishop McGough stressed: “We are not our own judges. There is a judgment, be it that of the ballot box or history, that we cannot escape. In the vision of the judgement, the Gospel implies a vision for the future.

That vision for the future is encapsulated in the words of judgment reserved for those described as blessed in the Gospel of Matthew for today: ‘Then the King will say to those on his right hand. Come, you whom my Father has blessed. For I was hungry and you gave me food; I was thirsty and you gave me drink, a stranger and you made me welcome, naked and you clothed me, sick and you visited me.’

Bishop McGough added: “There can be no doubt that the vision set before us in those words envisages a society which has, as one of its most fundamental values, the care of its most vulnerBishop David McGough, Auxiliary Bishop of Birmingham, and Canon Gerry Breen, Cathedral Dean, (right) pictured during the Civic Mass.able members.”

Bishop David McGough concluded with this challenge: “The judgement of history will always be in favour of those countries who have arranged their affairs in such a way as to care for those who are most vulnerable. It is for us to have a vision for the future, and to determine that future by what we do now, the way in which we provide for the well being of all.”

“Its establishment came out of the political and social unrest that was sweeping through Europe in the 19th and early 20th centuries. It was making a statement that questioned movements in society which were seen as totalitarian, and, in many ways, a denial of the dignity of the individual that is the basis of our democratic society.”

Bishop Mc Gough, Titular Bishop of Chunavia, celebrated the Civic Mass in place of the Archbishop of Birmingham, the Most Reverend Bernard Longley, who had been summoned to Rome to attend meetings about ecumenical matters.

Before Mass, Canon Gerry Breen, the Cathedral Dean, headed the procession into St Chad’s Cathedral during the opening hymn: ‘Crown Him with many crowns, the Lamb upon His throne.’

Also among the congregation in the packed Cathedral were local Members of Parliament; local councillors; magistrates; the police; the fire service; members of the Birmingham Faith Leaders Group; the very Reverend Catherine Ogle, Dean of Birmingham Anglican Cathedral; the Principal of Newman University College, Birmingham.

During the Preparation of the Gifts, the beautiful motet ‘Jubilate Deo omnis terra’ (O be joyful in the Lord, all ye lands), words from the Psalms and music by Giovanni Gabrieli (1557-1612), was sung by the St Chad’s Cathedral Singers, conducted by Professor David Saint, Organist and Director of Music. During Communion, the choir sang ‘A Prayer of King Henry VI ‘ in Latin.

After the blessing, the National Anthem was sung and the joyful sound of final hymn, ‘Christ is made the sure foundation,’ reverberated throughout every corner of St Chad’s Cathedral, a Pugin gem set on the edCouncillor Peter Douglas Osborne, Mr Adrian de Redman, and Mrs Stella Jennings, pictured outside St Chad’s Cathedral, after the Civic Mass.ge of Birmingham city centre.