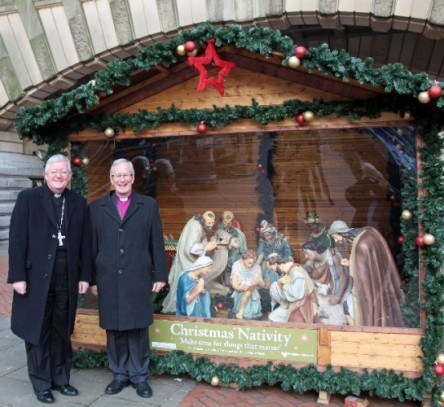 The 2012 Nativity Trail, the story of Christmas through 500 years of art, at Birmingham Museum & Art Gallery, was commended by Archbishop Bernard Longley, Bishop David Urquhart, the Anglican Bishop of Birmingham, and the Lord Mayor of Birmingham, at an official launch, on Friday, 30 November.

Speaking in the Round Room, the Archbishop of Birmingham described the Nativity Trail, now in its eighth year, and the large Christmas Crib, situated in the popular German Christmas Market outside as: “A little sign of what it means to believe in Jesus in the market place”.

Archbishop Longley emphasised that the leaders of other faiths in Birmingham all supported and respected the Nativity Trail and the Christmas crib, as Christians of various traditions respected the faiths and festivals of others.

The relationship between Birmingham City Council and the Birmingham Faith Leaders Group has improved out of all recognition since the late 1990’s when the City Council tried to abolish Christmas and replace it with the meaningless festival called “Winterval”.

It was a bad move and attracted a lot of negative media coverage. The public perception was that Birmingham City Council was trying to secularise the feast of Christmas to the abhorrence not only of Christians, but also of members of other faiths throughout Birmingham, a vibrant and multicultural city.

After the official launch of the Nativity Trail, the Lord Mayor of Birmingham, Councillor John Lines and the Lady Mayoress, Mrs Kathleen Lines, Archbishop Bernard Longley and Bishop David Urquhart, were shown round the galleries by Professor Ann Sumner, Director of Birmingham Museums Trust, and Victoria Osborne, Curator of Fine Art.

The distinguished guests paused in the quietness of gallery 25, in front of the Nativity Trail – The Rest on the Flight into Egypt, c1620 by Orazio Gentileschi (1563-1639) – for a picture to mark a memorable occasion amid the noise, busyness and hurly-burly life of the City of Birmingham at Christmas.