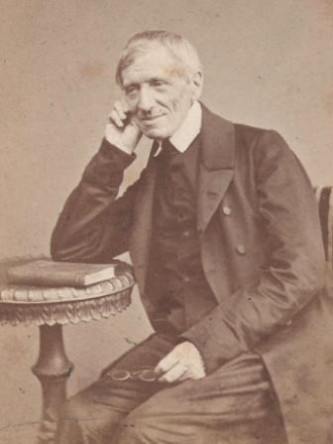 Archbishop Bernard Longley spoke about the particular devotion that Cardinal Newman had to the Blessed Virgin Mary, during his homily at Mass on the Solemnity of the Immaculate Conception, Saturday, 8 December, in St Chad’s Cathedral, Birmingham, UK.

The Archbishop of Birmingham: “Two years ago, following the Beatification of Blessed John Henry Newman the Birmingham Art Gallery and Museum assembled an exhibition of some of his personal belongings. Among them was a beautiful enamelled picture of our Lady under the title of the Immaculate Conception.

“It was a reminder of his particular devotion to the Blessed Virgin Mary and his understanding that her Immaculate Conception helps us to deepen in our understanding of the Incarnation of Christ her Son.”

Archbishop Longley said: “Cardinal Newman reflected on the doctrine of the Immaculate Conception in the context of his own journey of faith in becoming a Catholic. He emphasised the importance of seeing this doctrine as part of the greater whole of Christian faith.

“In a letter written in 1860 he said: Catholics do not view it as a substantive and independent doctrine, so much as one of a family of doctrines which are intimately united together. The truth we recognise in our Lady’s life sheds light on the work of saving grace in our own lives.”

The Archbishop emphasised: “The question addressed by God to Adam in the Book of Genesis is also addressed to Mary and to us: Where are you? Our Lady’s vision was not clouded by sin and she was able to offer an honest and truthful answer to that question.

“It is the angel Gabriel who speaks on her behalf when he announces: Hail Mary, full of grace: the Lord is with you. Mary is always in the presence of the Lord for whoever truly serves him is always close to him: I am the handmaid of the Lord.

“Mary was prayerful and reflected on her life’s experiences: she pondered these things in her heart. Pope Benedict has recently written of this pondering of Mary as an interior conversation. No doubt, as the life of her Son unfolded before her, she looked back and understood the meaning of what she had seen and heard and felt.

“St Luke does not disguise the fact that our Lady, even though she was full of grace, was deeply disturbed by the angel’s words. This was a natural, human reaction of bewilderment and astonishment. Such a powerful message made her see the reality of her life and accept God’s invitation.”

Archbishop Bernard Longley concluded his homily on one of the two Patronal Feasts of the Archdiocese: “Because of her Immaculate Conception Mary’s ear was finely tuned to the voice of God throughout her life. In the encounter with Gabriel, God showed her where she stood and her response was prayerful obedience: Let it be done to me according to your word.

“As we reflect prayerfully with our Lady today may we be granted the same insight to know where we stand in God’s love and so come to share her confidence in God’s plan for the future and her readiness to accept it.”