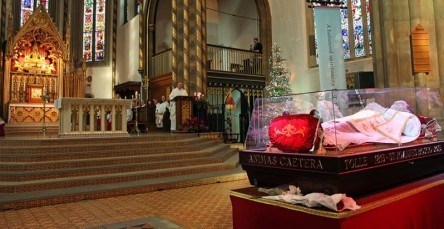 Archbishop Longley tells young pilgrims “Do not be afraid!”
By Peter Jennings and Kevin Grant.

For a second day large numbers of young pilgrims, pilgrims too of all ages, flowed from all parts of the Archdiocese of Birmingham and from further afield to venerate the Relics of Don Bosco, St John Bosco (1815-1888), the great saint for Italian youth, at the Metropolitan Cathedral and Basilica of St Chad, Birmingham, on Wednesday, 9 January 2013.

The casket bearing the life-size effigy of Don Bosco which contains the right hand of the saint was sealed in Turin before beginning its six-year journey throughout the world. The casket weighing nearly a ton includes in the inscription running round its base the saint’s inspiring words: “Da mihi animas; caetera tolle” (“Give me souls, take everything else away”).

Archbishop Bernard Longley was the chief celebrant and preacher. At the altar with him was Bishop Emeritus Philip Pargeter, Fr Martin Coyle SDB, Provincial of the Salesians in Great Britain, and Father Peter Brealey SDB, parish priest of the only Salesian parish in the Archdiocese of Birmingham, Our Lady Help of Christians in Cowley, Oxford.

Approaching the altar Archbishop Longley knelt in brief prayer with his concelebrants before the casket, kissing it as he rose.

The Archbishop of Birmingham warmly welcomed all the pilgrims present before beginning the Mass. Four young sentinels held huge Don Bosco banners which they paraded forward at the Procession of the Gifts. On this second day the heart of the congregation were people from the secondary schools throughout the Archdiocese; the day before had been the turn of the primary schoolchildren.

In his homily Archbishop Longley said: “We are fortunate that we catch a very special moment in the history of Don Bosco and the religious Congregation that he founded, the Salesians. The visit of Don Bosco’s relics is part of a six-year programme that sees the relics travel across all five continents in preparation for the 200th anniversary of St John Bosco’s birth in 2015.

“As part of the preparation for that special occasion Don Bosco’s relics have come to us so that we can draw close to this saint for young people and be inspired by his life.”

The Archbishop of Birmingham said: “Concerned for the well-being and education of the young people in Turin Don Bosco gave them opportunities to deepen their knowledge and love of Jesus Christ. The saint was also blessed with the kind of personality that made young people feel at ease in his company.”

In his concluding words, directed particularly to the young in the congregation, Archbishop Longley urged: “Be inspired by Don Bosco’s life to let the words of Jesus ring true for you. Live your faith with confidence, especially in this Year of Faith, and recognising the presence of Jesus, do not be afraid.”

The congregation in the packed Cathedral joined enthusiastically in singing the hymns and the parts of the Mass, one line from the Don Bosco hymn “Friend of the Young” capturing the character of this Patron Saint of Young People: “A humble man with many dreams, loved by everyone”.

Among the concelebrants at the Mass were Mgr Marcus Stock, General Secretary of the Catholic Bishops’ Conference of England and Wales, priests of the Archdiocese of Birmingham and members of the Salesian congregation in Great Britain, including Fr David O’Malley, their Vice-Provincial.

The surprising and extraordinary devotion shown during this visit of the Relics of Don Bosco evoked memories of the time that the relics of “The Little Flower”, St Thérèse of Lisieux (1873-1897) were brought to St Chad’s Cathedral, during September 2009. Both these pilgrim tours have drawn on deep aquifers of faith which bind and characterise the Catholic community in Britain today.

The Relics of Don Bosco began their journey to Cardiff following the closing liturgy at 6pm in St Chad’s Cathedral.

St John Bosco died in Turin on 31 January 1888, aged 72. A large proportion of the population of the Northern Italian city turned out for his funeral. He was declared Blessed in 1929 and Canonised by Pope Pius XI on Easter Sunday, 1 April 1934.