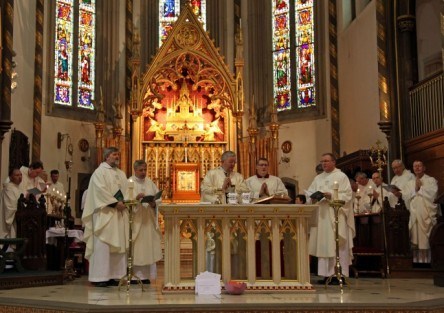 Large numbers of young pilgrims, indeed, pilgrims of all ages, from throughout the Archdiocese of Birmingham and beyond, flocked to venerate the relics of St John Bosco (1815-1888) the great Italian, at the Metropolitan Cathedral and Basilica of St Chad, Birmingham, yesterday, Tuesday 8 January 2013.

There is another opportunity today, Wednesday, 8 January, to be part of an inspirational pilgrimage and to see the casket that contains the right-hand of St John Bosco, during its two-week tour of the UK. Archbishop Bernard Longley will be celebrating Mass and preaching at 12.15pm in St Chad’s Cathedral.

In his welcome before the arrival of the relics, Archbishop Bernard Longley said: “It is a privilege for the Archdiocese of Birmingham to welcome the relics of St John Bosco at St Chad’s Cathedral. This great Salesian saint, who was affectionately known as Don Bosco, is a wonderful model of priestly concern for young people in our local church communities.

“The visit of his relics to Birmingham will be an enormous encouragement to parents and grandparents concerned about passing on their faith to the next generation as well as to teachers and all those involved in the education of young people across the Archdiocese.”

The Archbishop of Birmingham added: “As we gather over these two days to pray in the presence of Don Bosco’s relics, it will be an opportunity to give thanks for the powerful witness of so many young Catholics in the Midlands.

“We are truly blessed that young Catholics in our parishes and schools make their faith in Jesus Christ a priority in their lives and that they are willing to give so much time and energy for the Church’s mission and outreach. May the prayers and example of Saint John Bosco encourage them more and more during the Year of Faith.”
Archbishop Bernard Longley was the principal celebrant at 12.15pm Mass in St Chad’s Cathedral, yesterday, packed to capacity with primary school children and their teachers, from schools throughout the Archdiocese of Birmingham.

During a challenging homily Fr Martin Coyle SDB, Provincial of the Great Britain Province, emphasised that St Don Bosco, who is the Patron Saint of schoolchildren and young people, “was a great saint, who was always cheerful.”

Fr Coyle asked each of the pilgrims present to turn to the person next to them and smile at them for five seconds. He said: “It is infectious and it spreads. People have to try very hard not to smile back. It makes a difference to someone else’s life.”

He concluded: “It’s quite simple to be holy – by being happy, not long faces. We need to share joy with one another. Try to be cheerful each day and smile at someone. Others will join in and it will make a difference!”

St John Bosco, founder of the Salesian Order, was born on 16 August 1815 in Piedmont, Italy the youngest son of a peasant farmer who died when he was only two. His mother brought him up in extreme poverty. When he entered the seminary in 1831, his clothes and shoes were provided by charity.

He was ordained in 1841 and originally dreamed of becoming a foreign missionary, but soon settled into what became his life’s work – teaching young men and boys mainly in Turin.
He then went to live with his mother and 40 street boys. More and more boys came to stay. By 1856 there were more than 150 living in the centre and 500 children who came to visit daily. John set up day and evening classes for them, recruiting ten priests as teachers, and he established workshops to train them to become tailors and shoemakers.

A cheerful personality, John Bosco developed a reputation for being a visionary and “wonder-worker”, with a particular gift for handling difficult youths. He never used any form of punishment, but was kind and firm.

On Sundays he used to take boys on trips into the countryside, with Mass to start with, followed by breakfast, open air picnics, games and vespers, before going home. He believed natural beauty and music were very important for the development of young people.

In 1859 he began to organise his Congregation which was formally approved in 1874. He also helped set up similar schools for girls.

By the time of his death during 1888 there were 768 members in 64 houses around the world. Today there are many thousands, with schools as well as seminaries.

St John Bosco died in Turin on 31 January 1888, aged 72. A large proportion of the population of the Northern Italian city turned out for his funeral He was declared Blessed in 1929 and Canonised by Pope Pius XI on Easter Sunday, 1 April 1934.