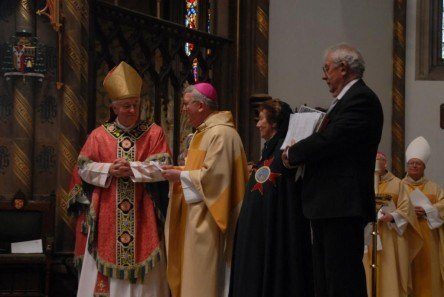 “We share the pride of the Church in England and Wales at welcoming your return to this city as Cardinal,” said Archbishop Bernard Longley at the beginning of a Mass of Welcome for Cardinal Vincent Nichols celebrated on Sunday at St Chad’s Cathedral, Birmingham.

He thanked the new Cardinal, as he takes up new responsibilities in Rome, for his “defence of the most needy and overlooked members of our society” and for his “national and ecumenical leadership.”

He also expressed gratitude to his predecessor for being ready to “pitch your tent among the Midlands people of this city and the Archdiocese who took you to their heart.”

On his first visit to Birmingham since becoming Cardinal, the Most Reverend Vincent Nichols said that he was “delighted” to be back in the city.  “It’s a chance for me to rejoice in the richness of life that I received in Birmingham; to thank God for it and I hope to keep and refresh some of the friendships that I made.”

As a sign of congratulations and affection for the new Cardinal, the Archdiocese of Birmingham collected a gift of over £30,000.  Cardinal Nichols has asked that this gift be given to the suffering Church in the Holy Land, through the Friends of the Holy Land, a charity which he helped to found.

Photos from the Mass and the reception – please see the Gallery accessible from the home page.

Cardinal Vincent Nichols was interviewed by Richard Wilford on BBC WM just before the Mass of Thanksgiving at St Chad’s Cathedral to celebrate his becoming a Cardinal.

The new Cardinal said:
“I look forward to the opportunity of meeting many, many people.
“It’s a chance for me to rejoice in the richness of life that I received in Birmingham; to thank God for it and I hope to keep and refresh some of those friendships.”