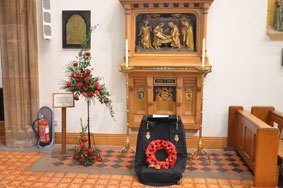 Archbishop Bernard Longley will celebrate a Requiem Mass at St Chad’s Cathedral, Birmingham at 11am on Sunday 3rd August to commemorate the centenary of entry of the British Empire to the War.

At this Mass all those who lost their lives in the conflict and those currently serving in the armed forces will be particularly remembered and special prayers will be said for peace in the world.

Archbishop Longley will be joined by Bishop William Kenney and Bishop Philip Pargeter who will concelebrate this Requiem Mass.

Archbishop Bernard Longley said:
“On the eve of the centenary of the outbreak of the First World War we shall be united with Christian communities around the United Kingdom in remembering all those who lost their lives in that terrible conflict and in praying for peace, especially in the many troubled parts of the world today.  We shall be remembering the beleaguered Christian communities of the Middle East, and in particular the Chaldean Church of Mosul, in our prayers on Sunday.

St Chad’s Cathedral, in common with many other churches, has a beautiful and poignant war memorial which was installed soon after the First World War ended.  We shall gather for a moment of silent prayer at the war memorial on Sunday to commemorate the many sacrifices made by service personnel and their families in this and subsequent conflicts.”