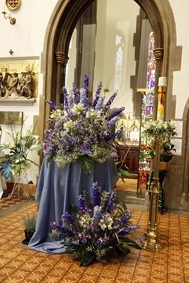 After virtually a year of planning our 2014 Flower Festival began to materialise into a reality. On the morning of Thursday 20 June teams of arrangers and helpers streamed into St Chad’s laden with flowers, stands, buckets and even the sail of a boat. All brought with them the hopes and good wishes of their respective and secretly proud congregation.

The fourth festival built on the success of earlier years to widen the appeal. Not only did we have displays from Catholic parishes from around the diocese but from Lichfield Anglican Cathedral, the Sikhs from the Nishkam Centre, Birmingham, the Polish Community, Stourbridge and Halesowen LIFE group and the Birmingham Diocesan Lourdes Hospitalité but for the first time we asked our Catholic schools and colleges to take part. This took the festival to another level and added yet wider interest to the whole event. It was an absolute delight to watch the primary school children from St Edward’s, Selly Park lying on their tummies in St Edward’s Chapel cutting, gluing and discussing the mosaic of their patron Saint representing a stained glass window. The more mature work of our secondary schools was of an extremely high standard and showed the talent we have around us.

Not only was the weekend one of flowers galore but music added to our celebrations. On the Saturday evening St Mary’s Anglican Church, Moseley gave a splendid choral concert supported by organist John Pryer under the direction of Michael Perrier. The festival closed on the Sunday with a magnificent concert by the Birmingham Schools Wind Orchestra, under the direction of Adrian Taylor. The organ soloist was Professor David Saint, Cathedral Director of Music.

The photographs that follow will give you a real flavour of the entire weekend and hopefully will encourage you to join us next year. We have already fixed our dates – 12 to 14 June 2015. We do hope that this years display teams and many more new ones will come and join us. If you would like more information please contact Anne Symonds. Telephone   01212491487

If you would like to purchase a CD of all the photographs or notelets of the festival to support the work of the Cathedral Association please contact either the Cathedral or Anne Symonds direct.