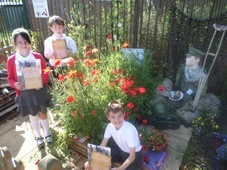 At St Thomas More Catholic Primary School in Sheldon, it was felt that it was extremely important for our young children to learn and understand the sacrifice of all the brave soldiers who died in WW1.

The whole learning experience gave the children a greater insight into WW1 and the topic has helped them to appreciate the sacrifices made by so many, especially during the WW1 100th Anniversary year. Part of the remembrance included a special prayer booklet being laid near the floral tributes at the Menin Gate in Ypres, by Teaching Assistant Ann Shakespeare on behalf of the school to remember the 100th Anniversary.

St Thomas More Catholic Primary School in Sheldon Birmingham have had a school garden for the last 11 years. It was recently moved and is now in a new area of the playground. One of the first ideas was ‘how’ to honour the special WW1 100th Anniversary. Two areas of the school garden were sown with poppy seeds last October, ready for a poppy field display for the August Anniversary and the poppies have already bloomed. A WW1 soldier, seated in his WW1 trench with his uniform and sandbags, also gives the area a very interactive ‘feel’ to the garden. The school potting shed has been decorated with WW1 and WW2 literature for the children to read in an ‘outside’ learning environment.

Year 4 children have been busy studying WW1 in their class work and produced some very touching ‘Soldiers Letters home’ from the trenches. The letters were written on old style paper to make them more authentic and are very moving to read. The children tried to imagine ‘how’ it felt to be writing a ‘last’ letter home and some of the letters have been sent to be displayed in a forthcoming WW1 Library exhibition. Five letters have been entered into a BBC competition and have been awarded Blue Peter Badges! Year 4 have been reading War Horse by the brilliant children’s author Michael Morpurgo and have really enjoyed all their different learning experiences.

The school has also entered a competition to design a WW1 memorial for Staffordshire. The design has been produced by a very talented Year 5 student called Louis McCoy. The monument is to remember the Christmas Day Truce – involving the story of the No Man’s Land Football Match. This new monument is due to be erected later in the year, from the competitions winning design, and will be judged by the British Schools Council and the Duke of Cambridge. Louis’ entry is down too the last 35!

Year 6 preformed an end of year WW1 production which went down brilliantly and the school choir have joined into the spirit by visiting various events around the region including the Royal Star and Garter Nursing Home having learnt a variety of songs from the World Wars. The residents joined in with many of the well known songs and it was a wonderful event for all concerned. All in all this incredibly special start to the 100th Anniversary has been recognised by the school and given the children a chance to reflect on the sacrifice of war.