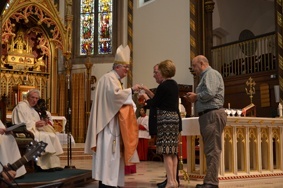 The large congregation was led in lusty singing by Dan Callow of One Life Music and by pupils from St. Joseph’s, Nechells and St. Chad’s, Newtown, Schools.

The Mass was a truly happy occasion, with the majority of the ninety SVP Conferences in the Birmingham Archdiocese represented for their rededication. Archbishop Bernard’s inspiring sermon included references to his personal family connections with the SVP.

After the Mass, a Festival Gathering and buffet lunch were held in the Grimshaw Room. There was a brief address by Adrian Abel, SVP National President, England & Wales and a presentation by Mary Scott of The Holy Ghost & Mary Immaculate Conference, Olton, on the work of the SVP Food Distribution Project. This venture, launched some three years ago, collects food which has reached its sell-by date from a local branch of a major wholesaler and delivers it to some 1000 needy persons in the Birmingham area 6 days per week. Many SVP members are involved on a rota basis, as well as others who are not in the SVP.

Archbishop Bernard then again addressed the Gathering, a fitting conclusion to a spiritually uplifting day with friends old and new.

For further information on the work of the SVP or on becoming a member, contact Birmingham Central Council Secretary John Barley at johnbarley13@btinternet.com or on 07801 630261.