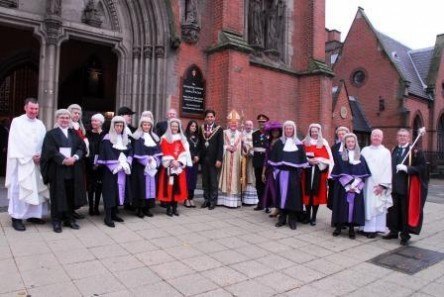 As a shepherd keeps all his flock in view when he stands up in the middle of his scattered sheep, so shall I keep my sheep in view.

At the Annual Civic Mass, celebrated on the Feast of Christ the King (23 November), the Archbishop of Birmingham, the Most Reverend Bernard Longley said, ‘As the Church’s year draws to a close and we prepare for a new season of Advent leading up to Christmas it is a great pleasure to celebrate this annual Civic Mass for the wellbeing of our city and for God’s blessing upon all its people.’ He prayed especially for all those who serve the common good of the people of Birmingham and for those who are most in need in our communities at this time of year.

Focusing on some of the city’s charitable projects that make a difference to people’s lives, the Archbishop referred to his visit to Sifa-Fireside Centre in Digbeth that is working to tackle homelessness and alcohol abuse. He also referred to the fellowship shared with St Philip’s Anglican Cathedral and how we look forward to being with them during their 300th Anniversary celebrations in 2015. His Grace highlighted the friendship that exists with their Cathedral Dean Catherine Ogle, and that which he shares with other Faith Leaders.

Poignantly he said that, ‘There are times when we see the evidence of inhumanity, the effects of neglect or indifference to want in the lives of children or vulnerable people, the capacity to exploit people’s lives for material gain, and irresponsible behaviour that results in suffering for others.’ The Archbishop went on to say that, ‘But these things often draw the best by way of response from organizations and dedicated volunteers.  There are many times through them when we are enabled to see the beauty of the human nature that God has created and the potential for goodness given a chance to flourish.’

‘Today’s feast of Christ the King’, the Archbishop said, ‘emphasises the compassion of Jesus as a servant or shepherd-king who notices all the flock.  He is ready to leave the ninety-nine to seek out the lost sheep and return it to the fold.  His ministry is foretold by the Prophet Ezekiel in the first reading: As a shepherd keeps all his flock in view when he stands up in the middle of his scattered sheep, so shall I keep my sheep in view… Christian faith teaches that Jesus was born for this ministry of service, ultimately to give his life out of love for the world and to rise to new life to give us a new way of living.’

The Nativity of Christ is a story that needs and deserves to be re-told, and it is for this reason that the Archbishop is immensely grateful that, ‘the City Art Gallery and Museum has re-instated this year the Nativity Trail, re-telling the story of Jesus’ birth through beautiful and evocative works of art that have the power to touch and move us.’ His Grace referred to this theme being taken up in a recent new book by Bishop Christopher Cocksworth, Bishop of Coventry, Seeing Jesus and being seen by him.  ‘He reflects in his book on people who saw Jesus and discovered what it was like to be seen by him.  They were never quite the same afterwards…seeing differently in the light of that seeing. It challenges us all to ask ourselves’, His Grace added, ‘how do we dispose ourselves to see clearly and objectively, not without feeling but without prejudice? Do I really see and therefore try to meet the needs of those who are hungry and thirsty, those newly arrived as strangers and those who have nothing, the sick and those who are in prison?’

‘Christians must join forces with all people of good will together with people of other faiths in reaching out to the neediest people in our society,’ said the Archbishop, who then went on to explain that, ‘The Birmingham Faith Leaders Group is currently preparing to sign a Covenant with Birmingham City Council and we have been encouraged in this by the All Party Parliamentary Group on Faith and Society.  The Covenant will be a joint commitment between our faith communities and the local authority to a set of principles that will guide our engagement together, aiming to remove the mistrust that can sometimes exist and promoting practical co-operation for the common good.’

His Grace concluded, ‘We see our city as a very significant part of the world that God loved so much that he sent his only Son.  May the blessing of God’s Son, born a helpless child at Bethlehem and forever with us as a Servant-King, be upon all who serve this city and its people in public office today and in the year ahead.’ To read the Archbishop’s homily in full please click: Civic Mass, 23 November, 2014

In the photograph are:

Faith leaders including – Venerable Dr Kassapa (Buddhist) and the Reverend Beh from the Chinese Christian community.

Representatives from the diplomatic corps including consuls.

City Armourer, Principal of Newman College and a representative from Birmingham University

Representatives from the Scout Association and many organisations and societies in the Archdiocese.