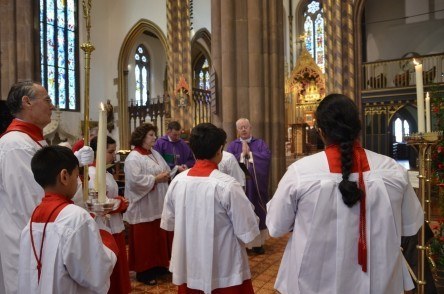 On Remembrance Sunday the cathedral celebrated its annual Mass of Requiem for the War Dead. Professor David Saint was at the organ with Nigel Morris conducting the Cathedral Choir in the evocative setting of the Requiem Mass by Maurice Duruflé.

In the light of the cathedral’s recent award of £227,000 from the Government’s First World War Centenary Cathedral Repairs Fund, the Silence at the War Memorial had an added poignancy. The Memorial was dedicated on Armistice Day in 1921 to honour the memory of the 200 hundred men and boys from the cathedral parish who fell in the Great War. The Prayers included the Exhortation of the Royal British Legion and the Kohima Epitaph:

‘When you go home, tell them of us and say, for your tomorrow we gave our today.’

The Dean, Canon Gerry Breen, made reference to the 200 in his homily based on the scripture readings of the day (The Feast of the Dedication) “The Fallen, by their ultimate sacrifice, have built something more than bricks and mortar as they remain the foundation of living stones on which our freedom stands.”