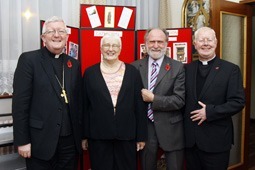 Friday, 7 November 2014 was the date of the eleventh annual dinner of the St Chad’s Cathedral Association. We were delighted that our president, Archbishop Bernard Longley, was once again our principal guest. As usual the dinner was held in the Canons’ Dining Room in Cathedral House. This fine room was decorated with vibrant displays of autumnal fruits and flowers which added to the atmosphere. Some seventy members and their friends sat down to a sumptuous meal. John Green, the Cathedral chef, made sure everyone’s taste was catered for by offering an excellent choice of courses. The meal was well served by five teenage waitresses who added youthful glamour to the room. Four of the girls were from St Paul’s School, Edgbaston and the fifth was one of the Symonds’ granddaughters. The wine flowed before and during the meal and it was a most enjoyable and convivial evening. This ever more popular event raised about £2,500 for the Cathedral.
My thanks to Canon Gerry Breen, Cathedral Dean and Chairman of the Association for allowing us to use the Canons’ Dining Room. Many thanks also to John Green, our chef, and Eileen Brennan his helper for all their work behind the scenes. John is already thinking about next years’ menu!

After the meal we were treated to a very different form of entertainment from earlier years – a trombone quartet called the English Trombone Consort. The four players were: Adrian Taylor, Kevin Pitt, Carl Fletcher and Robert Green. The English Trombone Consort was formed earlier this year by these four highly experienced professional trombone players from the Midlands. Between them they have well over 100 years of professional performing experience, both in this country and abroad, as soloists, orchestral players and with various chamber ensembles. Each player has a strong association with the city of Birmingham and they have each performed many times in the various concert venues across the city. The vast and diverse performing experiences of each of the four players, brings together a mature and stylistic approach to the ensemble’s equally diverse repertoire.

This very diverse programme had something to suit everyone. It started with Achieved Is The Glorious Work (from The Creation) by Franz Joseph Haydn, to Ave Verum by Mozart, followed by Locus Iste by Anton Bruckner and the tenth and final piece was Mr Sandman by Pat Ballard arr. By David Weller. This very atmospheric programme was devised by Adrian Taylor, a very good friend of the Cathedral.

The St Chad’s Cathedral Association makes an important contribution to the life of the Metropolitan Cathedral and Basilica of St Chad, a hidden gem designed by Pugin situated on the edge of Birmingham’s famous Jewellery Quarter. 2016 will be the 175th anniversary of St Chad’s.