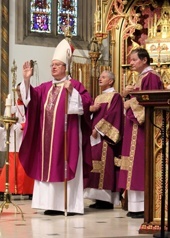 St Chad’s Cathedral saw a full congregation for the annual Mass held by Province 6 of the Catenian Association to remember their deceased members and their families. The Mass held on Saturday 15 November was celebrated by the Right Reverend William Kenny CP, Auxiliary Bishop of Birmingham.

Prior to Mass, Provincial President of Province 6; Alan Burgess read out the names of twelve members of the Association who had died in the previous year and sadly also added to that list the name of a well known and respected member; Brother Chris Boyle of North Warwickshire Circle who had passed away that very morning. In a thought provoking homily to an attentive congregation; Bishop William made mention that he had been in France earlier that week to remember those who had died in the World Wars and how it is right and fitting that we remember those who have gone before us; but that we also remember that all people are made in the image of God.

A particular feature of the Mass was the fact that with the exception of the Celebrant everyone on the Altar was a Catenian; including Deacons, Altar Servers, Readers and Eucharistic ministers; a true reflection of the contribution the Association and it’s members gives to the Church and Diocese in support of the faith.

A retiring collection for the Cathedral Restoration Fund was taken following the service, after which Brothers, family and friends collected in the Grimshaw Room for light refreshments. Provincial President Alan and his wife, Shirley then presided over lunch taken in the Canons Dining Room in Cathedral House.

In all, another magnificent, prayerful and rememberable Province 6 Catenian occasion.