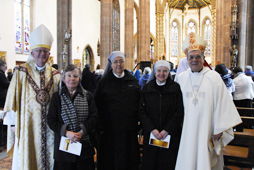 Once again in this Year for Consecrated Life Religious men and women including those from the Anglican Church gathered in the Grimshaw Room and St Chad’s Cathedral on Saturday 7 February.

The Day included Congratulations to those who were celebrating Jubilees this year; the opportunity to hear from and greet Archbishop Bernard and sympathise with him on the recent death of his father Fred and to receive input from Sister Una O’Neill a Religious Sister of Charity who came from Dublin to speak to us. Sr Una’s Theme was; ‘Living Religious Life with Passion’.Una reminded us that our lives only make sense if we are committed body and soul to the person of Jesus. In our reality there is always darkness and light. Many people in our world today are dispossessed and voiceless. Our call as consecrated women and men is to be a light in the darkness and to convey hope. It has been said that: ‘Hope is most a virtue when there is least to justify it’. Even in times of difficulty we set our hearts on Christ and his promise of life. We have choices to make: to be life-giving; to be compassionate; to be generous. Sometimes we get so caught up in theories and discussions and fears that we fail to see the obvious. To illustrate this Una told the story of the King who bought two falcons and delighted to watch them fly high in the sky each day. After some time he noticed that only one falcon was flying each day and he sent for the falconer to ask the reason. The falconer told him that no matter how much he tried to encourage the second falcon to fly he wouldn’t move from his perch. The king advised the falconer to speak to the local farmer who was a wise man. Next day he was pleased that both falcons were flying again. The king asked the farmer how this had come about. The farmer replied: ‘I just sawed off the branch on which the falcon was sitting.’

Una encouraged us to choose life and walk alongside those who are in the twilight zone. She reminded us of Pope Francis words on his recent visit to the Philippines when he spoke to the people who were in distress because of the frequent natural disasters: ‘All I can do is walk with you and I walk with you with my silent heart’.

On the Opening Day of a Magnificent Cathedral a man was admiring the building when a young girl asked him: ‘Do you like this Church Mister?’ He replied that he did and she went on to say: ‘I’m glad you like it because I helped to build it’. The man said: ‘You are a young girl, how could you help to build this magnificent Cathedral?’ The girl replied: ‘My daddy is a bricklayer and he was working on this Cathedral and I brought him his lunch every day.’ Each person contribution is important even though it may seem very little.

As Consecrated women and men we need to stop asking the questions of yesterday. We can focus on the past to avoid engaging with the present and the future. Like St. Joseph we need to believe the promise we have been given: The Magi had a Star, the Shepherds had a Song but Joseph only had a Promise and he trusted that the Promise would be fulfilled. As in the words of the Hymn: ‘We walk by Faith and not by sight’. We are no longer in control as we were in the past in schools and hospitals. It is important that we are what we say we are and keep our spirit of Joy. We need to follow the ‘ninth’ beatitude: ‘Blessed are those who are able to laugh at themselves, they will never cease to be amused.

Bishop Bernard quoted from the Reading from the Song of Songs: ‘Set me as a seal on your forehead, a seal on your heart like a seal on your arm. Christ is the seal on our forehead because we always profess him, the seal on our heart because we always love him and the seal on our arms because we are always working for him. Religious have a life in Community and a common purpose. Many belong to National and International groups but their contribution to the life of the Archdiocese is very important and the local Church would be impoverished without its Religious men and women. Jesus asks us to carry our Yoke and as a carpenter he knew the importance of the yoke corresponding to the shoulder of the bearer.
Special Congratulations were offered to this year’s Jubilarians some of whom were unable to be present:

All present renewed their vows concluding with words:
‘We continue to dedicate ourselves wholeheartedly to serve God and the Church, and to spread the kingdom of Christ with love and zeal.