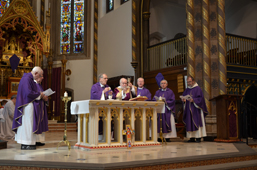 Tuesday 24 March 2015 was the 35th anniversary of Archbishop Oscar Romero’s martyrdom and the sixth Romero Mass at St Chad’s Cathedral.

The day started with 100 Year Nine students from schools across the Diocese taking part in a CAFOD “Dragon’s Den”. In an energetic workshop, teams had to prepare to ‘pitch’ an idea for a development project to a panel made up of CAFOD volunteers and teachers. The teams were enthusiastic in learning about the communities of El Salvador and the challenges they face.

The schools joined others for the Diocesan Romero Mass in St Chad’s Cathedral, where music was provided by students of Hagley High School, the readers by Bishop Challoner Catholic College and the gifts were offered by St Chad’s Primary School.

Bishop David McGough presided at the Mass and his homily reflected on the hope and the joy of the Resurrection, enabling CAFOD staff and volunteers to continue to do their work despite being faced daily with human suffering, saying “because we believe we share in Christ’s death and resurrection, we die to poverty, violence and injustice and we are raised up in Him who is perfect justice”. Bishop David spoke of Oscar Romero’s devotion to working in Christ’s name and of his example to all who work to create God’s Kingdom: “In giving we are part of Christ; we reach out to others, because in doing so we become part of Him”

Clare Dixon, Head of Latin America at CAFOD and a founding trustee of the Archbishop Romero Trust spoke at a reception after Mass. Clare has worked in Latin America for many years and has witnessed Romero’s legacy in the people of many countries. Clare said of Archbishop Romero: “in his life through his homilies, broadcast on radio across the country, he was always the voice of the voiceless; in his death he became the name of the nameless”. In 1978, CAFOD funded the rebuilding of the radio station which broadcast Romero’s homilies, when it was blown up by those who opposed Romero; Clare spoke of Romero’s homilies ringing through the streets of El Salvador every Sunday from radios in homes and cars. Romero called on us all to be “microphones of God”.

For many in Latin America, Romero has been long-hailed a saint and so his beatification in May this year will be a time of great celebration of the first Central American saint. Clare gave a simple summary of Romero from the point of view of the Salvadorian people:

“he spoke the truth, he defended the poor and so they killed him”