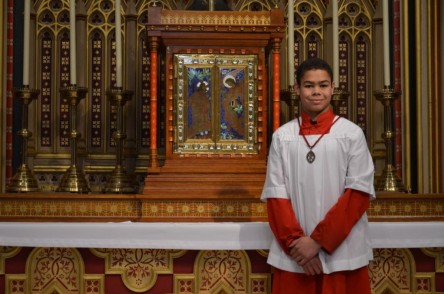 When most of us may have listened to George Osbourne, the Chancellor of the Exchequer deliver his budget to the nation, David Pearce, a 15 year old altar server from St. Chad’s Cathedral received a personal phone call from the Chancellor to inform him that he had won the national competition organised in conjunction with the Royal Mint to design the new pound coin! David was invited to Number 11 Downing Street to receive the personal thanks of the Government.

David’s design, chosen from more than 6,000 entries, includes an English Rose, a Welsh Leek, a Scottish Thistle and an Irish Shamrock. The coin, due for introduction in 2017, will be twelve-sided, like the old threepenny bit which was discontinued with decimalisation in 1971, and was one of the first coins to display the head of Queen Elizabeth II.

All at St. Chad’s add our congratulations to David, who with typical humility said: ‘I honestly cannot believe I have won.’