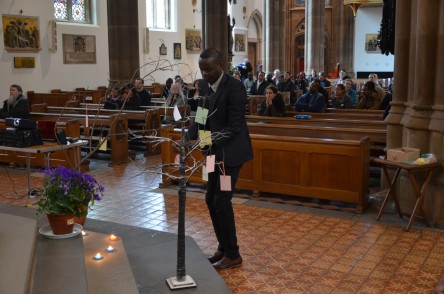 This was a very powerful and moving experience. It was also difficult in that we had some very small share in the suffering and anguish which asylum seekers go through in their journey to freedom and in their grief for loved ones, many of whom have been brutally murdered or left behind. People from several countries and of different faiths attended, as well as their many friends and supporters from around the Midlands.

A simple liturgy organised by St. Chad’s Sanctuary, included hymns and readings in many languages including Arabic, Amharic and Tigrinya. We watched some heart-breaking footage showing the horrendous journey many have been through while crossing the Sahara desert and the Mediterranean. During the evening many came forward to light candles for loved ones and write prayers which were hung on a prayer tree. Heart-broken people openly wept as they raised their arms in supplication around the altar. By the end of the vigil the sanctuary was filled with light and with symbols of hope and trust in a God who walks with us and hears our prayer.

In the tradition of an Irish wake, we were welcomed to the Canon’s Dining Room where we could express support and sympathy. Harrowing stories were listened to, many tears were shed and hopes and dreams shared.

Since the event there have been many expressions of appreciation and gratitude. People welcomed the opportunity to pray and grieve together.   Mohammad summed up the feelings of many: “Last week I had very bad news. All my family and friends from my village are dead. I have been feeling very shocked, sad and alone. The vigil took away my loneliness. St. Chad’s Sanctuary is my new family.”