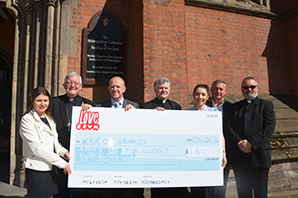 A branch of the poverty charity, the St Vincent de Paul Society (SVP), which hands out food at a Birmingham city centre soup kitchen has won funding that will secure its work for a year. The SVP group, from Our Lady of Mount Carmel church in Redditch, was one of the winners in a competition run by the charity ‘Lovebrum’ which supports smaller charities in the Midlands. The group had to post a short film about its work on Lovebrum’s website under the title ‘Serve Our Brummies’. Registered members of Lovebrum then voted for who they thought should win, with eight charities vying for the cash. The SVP group will receive two and a half thousand pounds; a spokesman for Lovebrum expressed delight that the charity’s members loved ‘Serve Our Brummies’ so much and said the award was well deserved and just the start of a relationship which could see further funding in the future.

The Redditch SVP group turns up twice a month to hand out food and clothing to the homeless at the Birmingham City Centre Soup Kitchen, which helps between seventy and one-hundred-and-forty people in need every night. It is one of six SVP groups from the Roman Catholic Archdiocese of Birmingham, which supports the Soup Kitchen project. The group’s Steve Martin welcomed the award, saying ‘it shows how the people of Birmingham are aware of the need to support those most vulnerable in the city.’