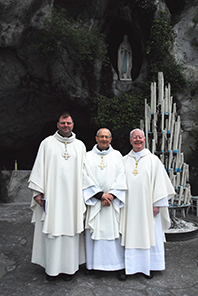 Birmingham shares its week in Lourdes with fellow pilgrims and friends from the dioceses of Middlesbrough and Plymouth. Following our inter-diocesan Mass Mgr Charlie Cavanagh, former pilgrimage director for the Scottish diocese of Paisley who travelled with Birmingham for our anniversary, is pictured in front of the Grotto with Canon Gerry Breen greeting newly appointed Chaplain d’honneur for Lourdes Fr Paul Farrer. Until recently Fr Paul was the director for Middlesbrough, and he continues to serve his diocese as Vocations Director and Youth Chaplain.

During the week Middlesbrough diocese presented Birmingham with a cake to mark the anniversary of our 75th pilgrimage. A celebration was held with the sick in the accueil.