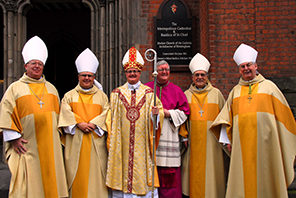 A Mass of thanksgiving for the newly appointed Bishop of Nottingham, Patrick McKinney, has taken place at St Chad’s Cathedral. Bishop Pat was a priest of the Archdiocese of Birmingham before being ordained to the episcopate in July and many of his  former parishoners in Stourbridge  travelled in to St Chad’s for the celebration. During the Mass Bishop Pat was presented with  a new Crozier, made in Birmingham’s Jewellery Quarter by the same craftsman who made the silverware for the Beatification of Cardinal Newman by Pope Benedict XV1 at Cofton Park five years ago — Desmond McCarthy from Avon Silversmiths,  a parishioner of Corpus Christi, Stechford, Birmingham. Archbishop Bernard Longley said that over the years, wherever Bishop Pat had  served, he was very conscious of the responsibilities entrusted to him in furtherance of the mission of the Archdiocese and had been  dedicated and conscientious.  He said the clergy, Religious and lay faithful of Nottingham will find in him a devoted pastor.    The Archbishop said that as Bishop Pat leads his people in the years ahead he will see the cross of St Chad set in the crook of his crozier and be reminded of the prayers and affection of his old diocesan family.   Bishop Pat expressed his heartfelt thanks and assured the people of the Archdiocese that he would remember them in prayer.

Bishop Pat  was born on 30th April 1954,  the eldest son of Patrick and Bridget McKinney.  He was brought up in Birmingham and began his studies for the priesthood at in St Mary’s College, Oscott, the Archdiocese of Birmingham’s seminary for the training of priests, in 1972; he was ordained to the priesthood on 29th July 1978 in St Mary’s Church, Buncrana, Co Donegal, Ireland, where his family lives.

After his Ordination he was appointed assistant priest in the parish of Our Lady of Lourdes, Yardley Wood, Birmingham, and chaplain to St Thomas Aquinas Secondary School, Kings Norton, Birmingham. Between 1982 and 1984, he was a student at the Gregorian Pontifical University, Rome, where he gained a Licence in Sacred Theology. Returning to the Archdiocese of Birmingham, he taught fundamental theology in St Mary’s College until 1989, when he was appointed Rector of St Mary’s College, a post he held for nine years, during which period he was also a lecturer in ecclesiology, the theology of the Church. He was made a Prelate of Honour in 1990 and a member of the Metropolitan Chapter of St Chad in 1992, and  served for a time as Chair of the Birmingham Archdiocesan Ecumenical Commission.

He was appointed tenth Bishop of Nottingham in succession to Most Rev Malcolm McMahon OP, Archbishop of Liverpool, on 14th May 2015, and was ordained to the episcopate by Cardinal Vincent Nichols, Archbishop of Westminster, in St Barnabas’ Cathedral, Nottingham on Friday 3rd July 2015.