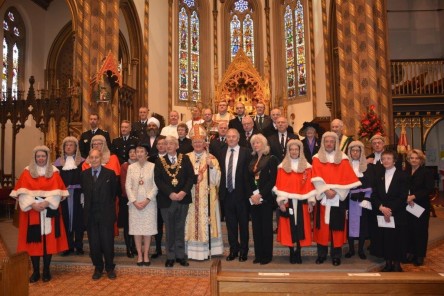 The Archbishop of Birmingham, the Most Reverend Bernard Longley, has recalled the deadly attacks in Paris in his homily at the annual Civic Mass at St Chad’s Cathedral attended by the city’s civic leaders as well as members of the judiciary and diplomatic corps.

Archbishop Longley echoed the words of Pope Francis in sending deepest condolences to the President of the French Republic and to its citizens……” such barbaric acts leave us shocked and we wonder how the human heart can conceive and carry out such horrible acts which have shaken not only France but the whole world.”

Archbishop Longley said “we know that those who carried out such acts of violence in Paris were not motivated by the authentic teachings of Islam. He recalled how last weekend “our Muslim brothers and sisters from the Birmingham Central Mosque prayed with us for those who died and also continue to suffer the effects of the attacks.”

The Archbishop said the events in Paris made us more than ever conscious of the sufferings inflicted by the same  forces within Syria and Iraq prompting  hundreds and thousands to seek refuge across international borders. He praised the work of volunteers helping refugees in the Midlands and revealed that as part of the Catholic  diocesan response to the call by  Pope Francis to reflect the loving mercy of God, a city centre property is being prepared which will accommodate eight refugees. The Archbishop said he was encouraged by the generous outreach of the churches and faith communities of the city and “we want to play our part, working together with them, for the common good of all the citizens of Birmingham.”