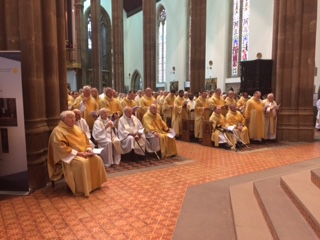 Hundreds of priests from across the Archdiocese gathered at St Chad’s Cathedral for the annual Chrism Mass – the occasion on which the holy oils are blessed and when the priests and deacons renew their promises to serve God and his people. At the start of Mass, Archbishop Bernard Longley said : “Our thoughts and prayers are very much today with those who died and with those who were injured in yesterday’s terrible attacks in Brussels.  In these days commemorating the Passion of our Lord we recognise the sufferings of others as uniting them closely with Christ.   We unite ourselves in prayer with Archbishop Josef de Kesel and all the clergy of the Archdiocese of Mechelen-Brussels, as they seek to bring the peace, healing and forgiveness of Christ to the people of their city.”

There are three oils that are blessed at the Chrism Mass: that of the sick, that of chrism, and that of catechumens. These are used wherever there is a sacramental anointing, such as the anointing of the sick, the anointing of those about to be or newly baptised, and the anointing of priests and confirmandi. In the procession of the oils to the altar, the oil of the sick was accompanied by a nurse from the Lourdes pilgrimage, the oil of catechumen by a catechist and the oil of Chrism by a candidate who has recently received the Sacrament of Confirmation. In his homily, Archbishop Bernard said : “He has anointed me.  Every priest can repeat those words of the Lord knowing that they express a profound truth about ourselves and that they shed light on our vocation, our ordination and our daily ministry.  Our greatest ambition is to imitate him and make him present in the world and in the lives of those we serve.  When the people of our parishes come to us to ask for support, for a blessing, advice or forgiveness it is because they are confident that they will find the Lord himself in our words and actions.  When we kneel down in grateful prayer at the close of each day our greatest joy arises from knowing that he has acted through our hands and spoken through our words.”  Archbishop Bernard recalled his own seminary days and the repeated advice of a wise spiritual director  – never to look for results but rather to trust that what was well-intended and offered as generously as possible would bear fruit wherever, whenever and however the Lord had determined:  “This is beautifully illustrated for me in the life of Blessed Dominic Barberi, to whom, as you know, I look for inspiration, guidance and occasionally a protective steer.  He was conscious of being anointed for a purpose that lay for much of his life beyond his grasp and his understanding, until he was finally able to reach the goal of his ambitions, spending his final years as a priest in Staffordshire.”  The Archbishop concluded his homily by recalling  that at the time of Blessed Dominic’s  beatification in 1963 Archbishop Francis Grimshaw wrote a Pastoral Letter from Rome, where he was participating in the Second Vatican Council ; he quoted a prayer from that letter and offered it for the priests who had gathered at the Cathedral to renew their priestly promises:

Let my prayer be that our diocese may never lack good and zealous priests, who will seek no glory but the glory of God; priests deterred by no difficulties from spreading and establishing the faith among those many…who know nothing of Christ our Lord, but wander…seeking contentment where contentment will never be found.  May Blessed Dominic pray for us all, both priests and people, and teach us all how great strength there is in the Cross on which Jesus died for us.