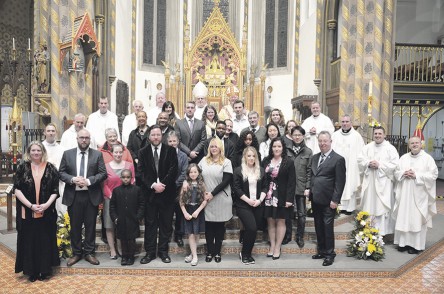 Ten people were baptised or received into full communion at the Easter Vigil Mass at St Chad’s Cathedral in Birmingham.   In his words of welcome to the ten, Archbishop Bernard Longley said : “As you receive the gifts of the Holy Spirit together in this Easter confirmation may you always use the Spirit’s gift of courage to bear witness to the impact of Christ’s resurrection in your lives.” Archbishop Longley told the congregation they were united worldwide with all those who declare that Jesus is risen – and he prayed for Christians who are declaring their faith in the face of persecution:  “Tonight we are caught up personally and as a community in the joy of the Gospel since the resurrection is the chief joy of the Good News that we are called to broadcast to others. The joy and hope that the resurrection brings is needed more than ever this year as we contemplate the impact of intolerance and violence upon so many communities and families.  Holy Week invites us to pray in solidarity with the Christian communities of the Middle East who have been savagely persecuted or forced to leave their homes because they will not renounce their faith in Jesus Christ.  Their desperate suffering also makes us conscious of other minority groups in Asia and Africa, including many Muslims, who are persecuted because they will not conform.”

Archbishop Longley said the message of the resurrection is that a new life and light spring out from the destruction and darkness of trial and judgment, suffering and death and that Jesus Christ brings hope to all humanity, irrespective of culture or creed, ability or achievement; he referred to the  women who were chosen to be the first witnesses and messengers of the resurrection:  “St Luke says that these women include Mary of Magdala, Joanna (whom we meet earlier in the Gospel as the wife of Herod’s steward Chuza) and Mary the mother of James.  These three were among the women followers of Jesus who ministered to him in Galilee out of their own resources.  In Luke Chapter 8 they are described as certain women who had been cured of evil spirits and ailments and we can imagine the feelings of gratitude and affection with which they followed our Lord. Jesus had changed their way of life, just as he had transformed the lives of the apostles.  But unlike most of the apostles these women found the courage to stay close to Jesus in his suffering and death on Calvary and to comfort his mother in company with the beloved disciple John.  Those women, in whose lives the mercy of God had brought about the great change imaginable, were chosen to be the first to see the empty tomb and to take this news to the apostles.  Only Peter, who had emerged from the trauma of betraying Jesus, was able to recognise the truth of their testimony.  Only when we ourselves have experienced forgiveness, healing and new life in Christ can we be effective ambassadors of his mercy.”