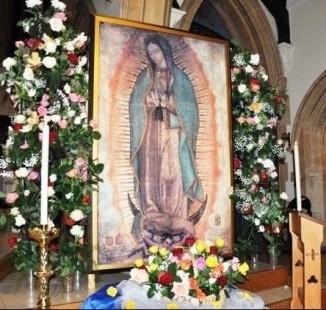 The Pilgrimage visit will start with on Friday 13 May with the Service of Reception at 7.00 pm followed by Mass, the principal celebrant being Canon Gerry Breen, and Prayers led by Father Jeremy Howard. The Knights of St Columba, with whom the Guardians have a National Partnership Agreement, to support and manage the visit, will be represented by Ernest Northey (Immediate Past Provincial Grand Knight) and John Carter (Provincial Grand Knight).

During the week the Miraculous Relic Image will be sited within the Lady Chapel. On the Saturday there is the March for Life when many supporters will come to the cathedral to venerate the Relic Image

On Thursday 19 May there will be the Service of Return following the 12.15 Mass. The Image will remain in the cathedral for 40 minutes after the service to allow for further veneration.

The purpose of the distribution of the Sacred Image is to help fulfil the prophecy of Saint John Paul II when visiting Guadalupe in 1979. His exhortation proclaimed “the Basilica of Our lady of Guadalupe will be the centre from which the light of the Gospel of Christ will illuminate the entire world by means of the distribution of the Miraculous Image of His Mother”. Saint John Paul II authorised the creation of 220 digital replicas of the original for worldwide distribution. These images have been declared as Authorised Relics that will extend the graces of evangelisation, conversion and truth to the nations in which they are placed and offering  the same graces as extended in 1531 and equal in graces to that of the original  first class relic.

History Poster of Our Lady of Guadalupe