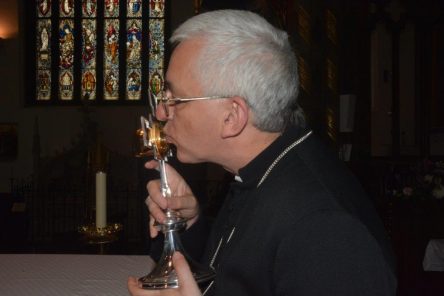 The new Anglican Bishop of Lichfield, the Right Reverend Dr Michael Ipgrave, has paid a visit to St Chad’s Catholic Cathedral in Birmingham, to pray and to venerate the relic of St Chad prior to his installation in September.  Welcoming him, Archbishop Bernard Longley described it as an opportunity to give thanks for all that Anglicans and Catholics share in faith.  They prayed  together in silence in front of the relic which was placed on the Altar; Archbishop Longley led a prayer for Bishop Ipgrave’s ministry as well as Lichfield Cathedral and its parishioners. Bishop Ipgrave reciprocated and then concluded by saying the prayer of St Chad. The Very Rev’d Adrian Dorber, Dean of Lichfield, was also in attendance.

Lichfield is among the earliest centres of Christian worship in the UK.  St Chad went in 669 to be the first Bishop in Lichfield and so impressive was his teaching and so genuine was the way he practised what he preached, that on his death his remains quickly became venerated and a place of pilgrimage.  The Dean of St Chad’s Cathedral, Canon Gerry Breen, said that up to the reformation St Chad was a saint for all people and was now uniting people again: “It’s wonderful that we came together to share things that unite us – he is our common patron. This historic visit by Bishop Michael  marks a change in theology and mission and reflects Christ’s prayer that we may be one.  It also reflects the working together on many levels that takes place between our two churches. It was a great gesture for Bishop Michael to come here and a sign of his generosity to work more closely. Both Cathedrals follow the pilgrim path of Chad.”

Canon Breen and Bishop David McGough, auxiliary of Birmingham,  were appointed as Ecumenical Canons of Lichfield Cathedral in November, the first in the Cathedral’s history.  Among Lichfield Cathedral’s many treasures is the exquisite 8th century sculpture of the ‘Lichfield Angel’ from the St Chad’s tomb chest, as well as the St Chad Gospels – which are  older than the Book of Kells.

After his forthcoming installation, Bishop Ipgrave will assume responsibility for one of the Church of England’s largest dioceses, leading an  episcopal team with the Bishops of Wolverhampton, Stafford and Shrewsbury.  When his appointment was announced he said: “I’ve had twelve wonderful years in London but I am so looking forward to coming back to the Midlands. Lichfield is the mother church of the Midlands, and the city of St Chad, a man of great humility and profound Christian faith.”