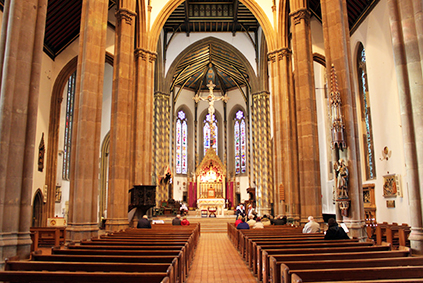 St Chad’s Cathedral is reporting a huge increase in numbers of visitors during the Jubilee Year of Mercy – ten thousand in one recent week.  A Pilgrimage of Mercy has been created around the inside of the Cathedral with pilgrims having the opportunity to encounter various aspects of mercy as they read the special banners that are on display throughout the building. Canon Gerry Breen, Dean of St Chad’s says he’s been overwhelmed by the success of the pilgrimage experience: “The number of visitors has rocketed, it’s probably one of the most popular Jubilee years and is extra special for us as we celebrate the 175th anniversary of St Chad’s. Not just Catholics either, but lots of other groups – such as rambling groups, historical societies, church history groups, ecumenical groups. Occasionally whole schools turn up – so over a thousand pupils at a time!”

Featured on the pilgrim’s journey around the Cathedral are men and women who have lived extraordinary lives in the spirit of the Beatitudes and who offer inspiration for living the Christian life today and for experiencing God’s mercy. These include universal saints like St Francis together with those on the path to sainthood and who have connections with the Archdiocese of Birmingham: Blessed John Henry Newman, Blessed Dominic Barberi and Mother Catherine McAuley, foundress of the Sisters of Mercy with links to the Mercy Convent in Handsworth.    Pilgrims are then encouraged to identify living pilgrims of mercy today in their own lives – such as the influence and example of parents, teachers or priests. Then at the end pilgrims are brought to the realisation that as they prepare to go out through the door of the Cathedral, they are also called to be pilgrims of mercy.

Canon Gerry has noticed how people are often taken by surprise by suddenly wanting to engage with the spiritual aspect of the experience : ”When we put a sign up above the confessional, suddenly people felt drawn to experience the Sacrament of Reconciliation – even local workmen came in and I recall one man who hadn’t been to confession for forty years. When people have gone round the Cathedral and seen the banners, it’s touched them in a real way and enabled them to reflect. It’s taken off on a much bigger scale than we expected.“

Even more visitors are expected to flock through the doors this month during the annual Flower Festival, from June 17th – 19th, when the whole interior will be beautifully bedecked by floral displays from parishes and schools – with special concerts also taking place.   Then, in July, a new series of lunchtime organ recitals are to begin ; they will take place on the first Thursday of each month, with the initial one on Thursday July 7th from 1.15 – 1.55 pm; admission free.

St Chad’s is known across the world as a beautiful building with a remarkable history and a rich heritage. It was the first Catholic Cathedral erected in Great Britain in 1841 following the Reformation of the 16th Century. St Chad’s was designed by the great Gothic Revivalist Augustus Welby Pugin, who was also responsible for the Palaces of Westminster and the iconic clock tower of Big Ben. The Cathedral is home to the relics of St Chad, which were originally interred in a shrine at Lichfield Cathedral in the year 672 AD.