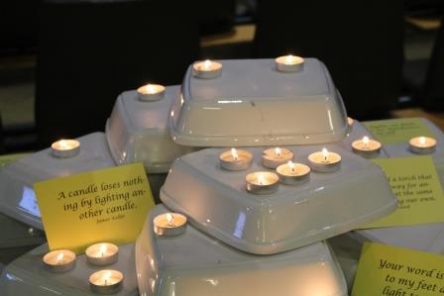 After the success of the Birmingham Churches Together 24 hours of prayer at St Philip’s Cathedral two years ago, and The Church at Carrs Lane last year, St Chad’s Cathedral are delighted to be welcoming the event this year, under the title “All are Welcome”.

With a new format spread over two days we are looking forward to welcoming a different mix of groups to participate this year, including some of our local faith schools. Taking place during the Week of Prayer for Christian Unity on Friday 20th (7am – 10pm) and Saturday 21st January (7am – 4pm), there will be opportunities to pray in different styles and draw on different traditions with each hour led by a different church, group of churches or Christian group. St Chad’s Cathedral are excited about the opportunity to invite so many ecumenical partners to join in praying together in the Cathedral.

Canon Gerry Breen, Dean of the Cathedral, together with Andrew de Valliere, site manager, have met with those from other local churches in order to prepare the event, helping to strengthen local ecumenical links. Archbishop Bernard Longley, along with his fellow chairs of Birmingham Churches Together, will be among those who lead prayer during the 24 hour period.

In the midst of our busy city, the 24 hours of prayer provides a space for each one who enters to pray for the diverse communities of our city, for the unity of the church as witnesses to the gospel, or for their own personal intentions. In previous years, many people have called in, sometimes to stay only a few minutes, while others have remained at prayer for several hours. St Chad’s Cathedral is always open for prayer, but during the event we will be offering in a more intentional way, together with our Christian brothers and sisters from other traditions, the possibility to find a space to pray: offering that possibility both to those for whom prayer is a regular and familiar routine and to those who fear they do not know how to pray.

Everyone is invited to come and join in the prayer during the event, whether staying for just a few moments, committing to join the prayer for one of the hours, or spending even longer in the cathedral. For those unable to join in person, you are invited to join in and pray in communion with those at St Chad’s Cathedral from wherever you are.