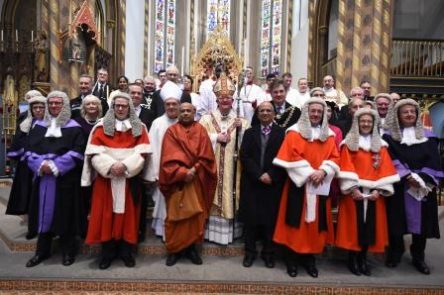 On Sunday 20th November at St Chad’s Metropolitan Cathedral in Birmingham, on the Feast of Christ the King, His Grace, The Most Rev Bernard Longley, Archbishop of Birmingham, welcomed all to this celebration and to the closing of the Jubilee Door of Mercy. Dignitaries in attendance included The Lord Mayor Cllr Carl Rice, Leader of the Council Mr John Clancy, Deputy Lord Lieutenant Prof Deirdre Kelly and High Court Judges Mrs Thirlwall, Mr Barling and Mr Keehan and other members of the Judiciary past and present.

In his address His Grace focused on the words of Jesus from the Gospel of the day, Jesus, remember me when you come into your kingdom (Luke 23:42). Words that we should use today as we pray for our families, our city and for those in need.

Referring to the unforeseen political changes and economic uncertainty as we await the outcome of the vote to leave the European Union, His Grace said, ‘Many of our parishioners who contribute spiritually, culturally and economically are EU passport holders and with them we are naturally concerned about their future’. And, with the international political shifts that, ‘we are concerned about the future well-being of the Baltic states’. To this he added, ‘In a world that is ever-changing we need the constancy of God’s loving-mercy and the abiding presence and influence of Jesus Christ.’

His Grace, with regard to the closing of the Year of Mercy, spoke of Pope Francis’ challenge to leave a lasting legacy from this Jubilee Year and spoke of the opening of Fatima House, a large residential property now accommodating women refugees and asylum seekers in the city centre, and the preparations for the opening of Tabor House next April as a permanent emergency shelter for homeless men and women in the city. His Grace concluded with these words, ‘These are some of the people dear to God and whose voices are heard by Jesus whenever they say to him: Jesus, remember me when you come into your kingdom. Jesus is asking us to make his Kingdom a reality today in the midst of our city. May we enable his reply to be heard again: Indeed I promise you, today you will be with me in paradise.’