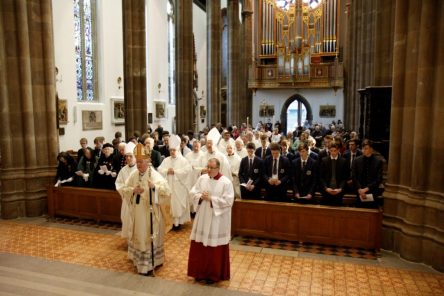 ‘Today’s feast of the Immaculate Conception marks the moment when God’s loving-mercy broke into the world in a new way, becoming a reality in the human nature of the eternal Son of God, born of the immaculate Virgin Mary’, said His Grace, Archbishop Bernard Longley in his homily celebrating this occasion which has such a special place in the life of our diocese. The Patronal Feast celebrated today is the 7th anniversary of the installation of His Grace, Bernard Longley as Archbishop of Birmingham, the 11th anniversary of David McGough’s episcopal ordination in the diocese and the 10th anniversary of Bishop William Kenney’s arriving in the diocese.

The Solemnity was celebrated at the Metropolitan Cathedral of St Chad by His Grace, Archbishop Longley and his three auxiliary bishops William Kenney, David McGough and Robert Byrne. The Cathedral was filled with representatives from all the parishes across the diocese from Oxfordshire to North Staffordshire as well as a group of 6th Form students from St Anselm’s College, Birkenhead. St Anselm’s is a Catholic Grammar School for boys in the Diocese of Shrewsbury. They also attended last year to go through the Door of Mercy. Also, a good number of Papal Knights and Dames were in attendance representing many years of Papal service for the Archdiocese.

In his homily His Grace reflected on the Jubilee Year of Mercy and the spiritual riches that have accumulated in the lives of the faithful over the last year, with an increase in the number of those celebrating the Sacrament of Penance and extended periods of prayers before the Blessed Sacrament. ‘Many thousands of people have entered through the Doors of Mercy in our shrines and pilgrimage churches’, he said, ‘St Chad’s Cathedral alone have witnessed 360,000 pilgrim visitors’. He spoke of the lasting memorials of the Year of Mercy that are now present in the diocese of Fatima House and Tabor House which are, respectively, home to women asylum seekers and refugees, and emergency shelter for homeless men and women of the city. ‘Mary of Nazareth would recognise the priority that was placed on providing a place of safety and support for them’, he said.

To finish, Archbishop Bernard, reflecting on the lowly heritage of Mary, through whom God would lift up his people, quoted from Blessed John Henry Newman; for whom prayers fervently continue for his canonisation: ‘She was a child of Adam and Eve as if they had never fallen; she did not share with them their sin; she inherited the gifts and graces (and more than those) which Adam and Eve possessed in Paradise. This is her prerogative, and the foundation of all those salutary truths which are revealed to us concerning her. Let us say then with all holy souls, Virgin most pure, conceived without original sin, Mary, pray for us.’