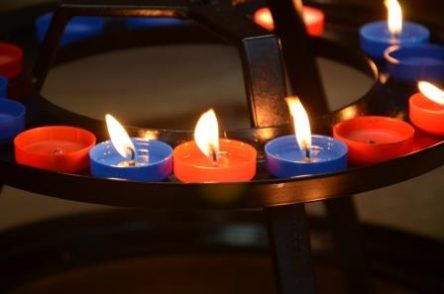 On Friday 20th and Saturday 21st January, during the Week of Prayer For Christian Unity, St Chad’s Cathedral hosted 24 hours of prayer in what has now become an annual event, in which different churches and Christian groups from across Birmingham come together to pray in, with and for our city.

With each hour led by a different church, group, school or organisation, and with each reflecting something of their own tradition and style of prayer, we experienced the church in all its beautiful diversity. Primary and secondary schools, charities supporting refugees, chaplaincies from universities and workplaces, and churches from across the spectrum of denominations were all represented. Together we prayed in words and in images, in stillness and in movement, in words and in silence, and often in music. We sang hymns passed down through generations and contemporary songs, we clapped to lively African tunes and were drawn into silence by reflective chants. We engaged with the familiar and the reassuring but also stepped out of our comfort zone to meet with others whose way of praying was a new experience.

Speaking after the Angelus on the Sunday of the Week of Prayer for Christian Unity, Pope Francis said: “I invite you to persevere in prayer so that the desire of Christ ‘that they all might be one’ may be accomplished.” The 24 hours of prayer stands as a witness to the possibility of unity with our Christian brothers and sisters from different traditions and hopefully serves to bring that vision of Christ, that all may be one, a little closer to being within our reach.

The number of people who were present ebbed and flowed throughout the event, but this was never about numbers anyway. It was always about providing a space of prayer that could bring grace and blessing. It is, as Canon Gerry Breen, Dean of the Cathedral described, our role to pray even for and in the midst of those who do not know we are praying for them, even for those who do not know that they need our prayers.

While part of the purpose of the event was to celebrate and contribute to Christian Unity, the theme that was chosen, “All Are Welcome” spoke too of a much wider message. It was a recognition that Christ’s call that “all may be one” is not just an end in itself, but rather enables the church to witness to God’s love for all the world. The 24 hours of prayer was part of that witness: offering a prayer which reached out and encompassed the whole of our city and our world: in all its joys and all its suffering; all its beauty and all its complexity, in all that it is and all it can be.

More pics can be seen at: http://www.stchadscathedral.org.uk/galleries/24-hours-prayer-christian-unity/