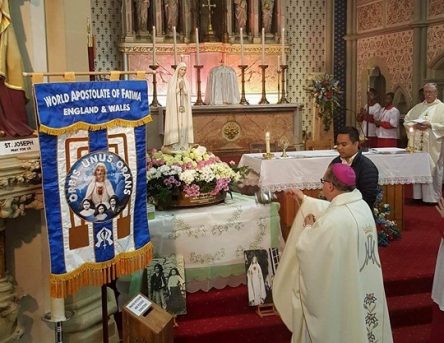 Nearly one hundred years ago, from May to October 1917, Our Lady appeared to three young shepherd children, Jacinta and Francisco Marto, and Lucia dos Santos, at Fatima in Portugal. In 2017, the World Apostolate of Fatima (WAF) in England and Wales will be promoting the Centenary of the Fatima apparitions through a programme of visitations to Cathedrals by the National Pilgrim Virgin Statue of Our Lady of Fatima, and Relics of Blessed Jacinta and Francisco.

This will start with a Visitation of the Statue and Relics to Westminster Cathedral on Saturday 18 February 2017, with Cardinal Vincent Nichols crowning the statue and presiding at Mass, and will continue until October with visits to 18 of the Cathedrals in England and Wales, including the St Chad’s Cathedral in Birmingham Archdiocese, from 29-30 July 2017. For details about these Visitations go to: www.worldfatima-englandwales.org.uk/visitation.html

The work of the WAF involves promoting the message that Our Lady gave at Fatima, when she spoke of the necessity of personal conversion, penance, and prayer, and particularly the importance of praying the Rosary for peace. She also asked for the Five First Saturdays devotion of reparation and the consecration of Russia, and promised that in the end her Immaculate Heart would triumph and a period of peace would be given to the world. The international World Apostolate of Fatima was officially approved by the Church as a Public Association of the Faithful of Pontifical Right in October 2010.

The Fatima message is more relevant than ever today, especially for the family. Pope St John Paul II said that the Church accepted the message of Fatima because it repeats Our Lord’s call: ‘Repent and believe in the Gospel’ (Mk 1:15); and after the beatification of Francisco and Jacinta on 13 May 2000, he said it is, ‘a message of conversion and hope which is the true Gospel of Christ’.

In 2006, Pope Benedict XVI expressed the hope that ‘the message of Fatima will be increasingly accepted, understood and lived in every community,’ and Pope Francis, too, has been very supportive of Fatima, and is due to visit the Shrine in May 2017.

A special Centenary Crown is being made in Portugal for the National Pilgrim Virgin Statue of Our Lady of Fatima. This will accompany the Statue as it journeys around England and Wales, and be used to crown it during the Visitations.

Pope Francis has granted a special Fatima Centenary Plenary indulgence, under the usual conditions, from 27 November 2016 to 26 November 2017, for those who go on Pilgrimage to the Sanctuary of Fatima, or visit an image of Our Lady of Fatima which is being publicly venerated on the 13 of each month from May to October 2017. Those who cannot travel can fulfil the conditions in front of a small image of Our Lady of Fatima.

The Pope’s initiative prompts the question: do I know what Our Lady asked of me at Fatima, and am I complying with her requests? The new CTS booklet, Message and Prayers of Fatima and also Sr Lucia’s Memoirs – Fatima in Lucia’s own words, vol. 1 – which they also stock, will help us to respond to these questions. www.ctsbooks.org)
The centenary year is important since it offers the Church a chance to look again at the message of Fatima – which is really a compendium of the Gospel for our times – and realise that the Fatima message and the Rosary are powerful weapons against modern secularism. The most important thing is not to let the centenary go by without doing something to deepen one’s knowledge of Fatima.