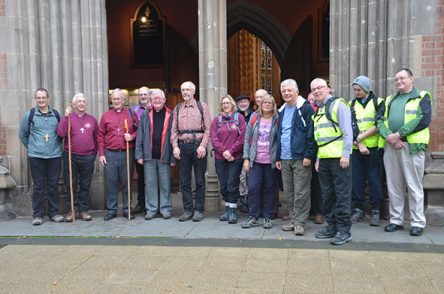 Almost 140 people – including the Catholic Archbishop of Birmingham and the Anglican bishops of Lichfield, Birmingham and Aston – took part in an historic walk of friendship from Birmingham to Lichfield on Saturday, 23 September. The Bishop of Lichfield, the Right Revd Dr Michael Ipgrave, said: “The example of St Chad is as relevant today as it was over 1,300 years ago when he became the first Bishop of Lichfield. Chad, a Northumbrian, crossed boundaries in a pioneer ministry, winning over the pagan Mercians throughout what is now the modern-day Midlands. It was fantastic on Saturday to journey as 21st century pilgrims together from Birmingham to Lichfield and follow in Chad’s footsteps, building bridges of trust, kinship and kindness.”

The Roman Catholic Archbishop of Birmingham, the Most Revd Bernard Longley, said: “I was delighted to take part in the ecumenical pilgrimage walk from St Chad’s Cathedral, Birmingham to Lichfield Cathedral in company with Bishop Michael and representatives from so many branches of the Church. “Walking, praying and witnessing together in this way was a practical demonstration of our commitment to the unity of the Church and our mutual regard for the legacy of the great missionary, St Chad. The pilgrimage walk enabled us to deepen our friendships in Christ and to pray for the intercession of St Chad for all those who bring the good news of Jesus Christ to the people of the Midlands today.”

Pilgrimage organiser Robert Mountford added: “The St Chad Pilgrimage celebrated the fact that, 500 years on from the Reformation, Catholics and Protestants have resolved many of the doctrinal issues that once separated them and are now, more than ever before, walking, praying and working together in respect, friendship and co-operation.”

The full list of church leaders who took part in some, or all, of the walk were:

Pilgrims were sent on their way at 9am with a blessing by Canon Father Gerry Breen, Dean of St Chad’s Cathedral, and received an official welcome from Canon Custos Peter Holliday upon arrival at Lichfield Cathedral at 6pm.