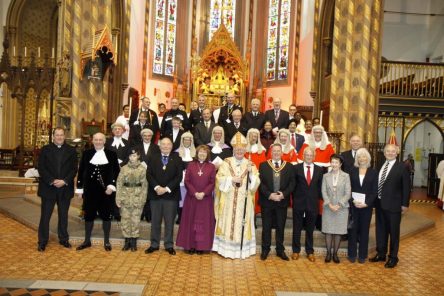 The Civic Mass is an important moment in the calendar of the cathedral each year and we look forward to it as an opportunity to pray for God’s blessing upon this great city.

Each year our regular worshippers welcome and join with those who represent the civic, judicial, diplomatic, academic and commercial life of the city and this Sunday was no different and no less of a joyous occasion. Welcomed also and fully engaged with are the people of faith from every dimension of the city’s life from the faith communities of Jewish, Muslim, Hindu, Sikh, Buddhist and Christian. We enjoy the freedom to worship God and enjoy the complementary values and virtues of our different beliefs.

In his homily His Grace, Archbishop Bernard Longley, urged us to reflect as we approach the great season of Advent, on the coming of God’s Kingdom at the end of time.’ We shall be judged by the rule of love’, he said,’ expressed in our concern for others’ needs.’ Our response to this call offers a judgement not on others but on ourselves.

His Grace focused on how our city of Birmingham has ‘continued to offer a home to so many who have come through and survived great tragedies or great disappointments. And yet, we still see the homeless sleeping in doorways, coming to the street kitchens or food banks and needing the winter night-shelters.’ He highlighted some of the cities outreaches such as Tabor House, St Basil’s, Guru Nanak Nishkam Sewak Jatha Gurdwara’s, the Sifa Fireside Centre, Fatima House and St Anne’s Hostel and the recent campaign of Red Wednesday which featured St Chad’s cathedral being floodlit in red. Of course there are many more outreaches on offer across the city and across the diocese.

Red Wednesday is a campaign that our cathedral joined, calling for respect and tolerance for people of faith and between different faith traditions worldwide. His Grace said, ‘Our city has a tradition of respect and tolerance which arises from the best in our shared human nature.’ He reflected, ’Blessed John Henry Cardinal Newman believed that the image of God was recognisable in every human being.’

To read the Archbishop’s homily in full please go to: https://www.birminghamdiocese.org.uk/bishops/archbishop-longley/homilies/