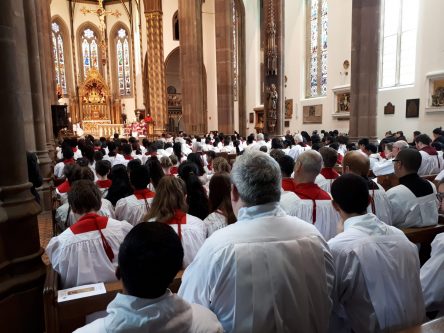 It was a sight to behold at St Chad’s Cathedral today (Sat 17 Feb) as hundreds of altar servers from across the Diocese gathered to take part in this year’s Guild of St Stephen Annual Mass.

The procession of altar servers stopped passers-by in their tracks as they made their way from the crypt into the cathedral.

With more than 200 altar servers of all ages, and their families, gathered for the event, it was standing room only inside.

The Principal Celebrant at the Mass was The Right Reverend Robert Byrne, Auxiliary Bishop of Birmingham, who was joined by several concelebrating priests and deacons, and representatives from the Guild Archconfraternity of Westminster.

The Mass was also Fr Michael Dolman’s first as Diocesan Director of the Guild of St Stephen.

During his Homily, Bishop Byrne said: “It is a great pleasure for me to say this Mass for you.

“It gives the Diocese an opportunity to thank you.

“Altar servers perform a very important part of the Church’s life. Mass is the centre of everything we do. That moment we encounter the Lord.”

He continued: “You should be examples to your parishioners for the love of the Mass and the love of God.”

Following the Mass a period of Adoration was observed, before refreshments were served.

The Guild of St Stephen is an international organisation of altar servers, founded in England in 1904 by Fr Hamilton McDonald. The Guild has spread and developed since then.

The objectives of the Guild are: To encourage, positively and practically, the highest standards of serving at the Church’s liturgy and so contribute to the whole community’s participation in a more fruitful worship of God. To provide altar servers with a greater understanding of what they are doing so that they may serve with increasing reverence and prayerfulness and thereby be led to a deepening response to their vocation in life. To unite servers of different parishes and dioceses for their mutual support and encouragement.