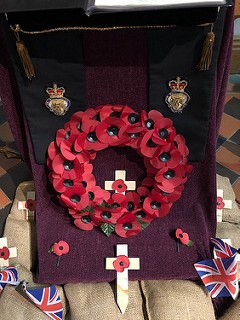 Parishes across the Diocese took time to remember and reflect on the great losses and pain of WW1 on the 100th anniversary of the Armistice signing.

In his homily, preached at the Masses at St Chad’s Cathedral this weekend, Deacon Kevin Lawrie (Motherwell Diocese).

He said: ‘This month of November is when the Church asks us to pray in a special way for those who have died. We are asked to remember them and ask God to welcome them into eternal life with Him.

‘We are praying for all those people who maybe in purgatory awaiting the everlasting light of the love and mercy of God the Father to shine upon them.

‘Today we are asked specifically to pray for and remember those who died as a result of war and conflict throughout the world.

‘We acknowledge that this year is the 100th anniversary of the ending of World War I.’

On Thursday 8th November at St Gregory’s in Stratford Upon Avon the Holy Hour was dedicated for Peace and the Dead of World War 1. The Parish Priest, Fr Alex Austin OSB, was joined by parishioners as they reflected on the Armistice Day.

St. Elizabeth’s Church, Coventry inherited the ‘Local War Heroes Memorials’ from the nearby Vauxhall club [which was earmarked for conversion into flats] in April 2016. This was deemed most appropriate as the Parish held one of its very earliest Masses there on 27th November 1912 in what was called a ‘Commodious’ room situated in the then called ‘Highfield Street’ between 1914-18. Some 139 club members served in the Forces  including Parishioners. Ten of them made the ultimate sacrifice: W. Boswell; A. Checkley; W. Crawford; J. Frost; F. Furnival; Fr. Greening; J. McDermott; I. Rhodes; A. Taylor and J. Webb/