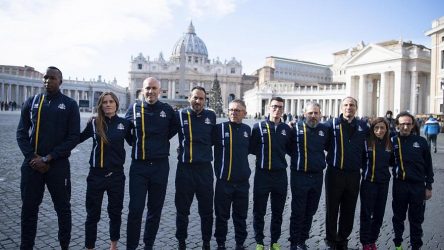 VATICAN CITY — The Vatican launched an official track team Thursday with the aim of competing in international competitions as part of an agreement signed with the Italian Olympic Committee.

About 60 Holy See runners — Swiss Guards, priests, nuns, pharmacists and even a 62-year-old professor who works in the Vatican’s Apostolic Library — are the first accredited members of Vatican Athletics. It’s the latest iteration of the Holy See’s long-standing promotion of sport as an instrument of dialogue, peace and solidarity.

Because of the agreement with CONI, the team is now a part of the Italian track association and is looking to join the International Association of Athletics Federations. It is hoping to compete in international competitions, including the Games of the Small States of Europe — open to states with fewer than 1 million people — and the Mediterranean Games.

“The dream that we have often had is to see the Holy See flag among the delegations at the opening of the Olympic Games,” said Monsignor Melchor Jose Sanchez de Toca y Alameda, team president and the head of the Vatican’s sports department in the culture ministry.

But he said that was neither a short-term nor medium-term goal, and that for now the Vatican was looking to participate in competitions that had cultural or symbolic value.

Vatican pharmacist-runner Michela Ciprietti told a Vatican press conference the aim of the team isn’t exclusively competitive, but rather to “promote culture and running and launch the message of solidarity and the fight against racism and violence of all types.”