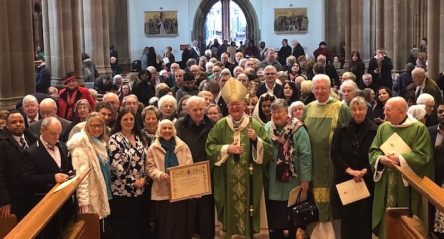 Over 6,500 years of marriage has been celebrated at St Chad’s Cathedral today (Sun) – a truly remarkable achievement.

The Cathedral was packed as almost 200 couples, and their families, gathered to take part in the diocese’s first Thanksgiving Mass for Marriage.

It really was a sight to behold as hundreds of people streamed into St Chad’s to take part in a unique celebration.

From engaged couples who are about-to-be-married right through to those celebrating more than 60 and 70 years as Mr and Mrs, it was wonderful to be amongst such love and commitment.

Archbishop Bernard Longley led the Mass and as part of the occasion all married couples had the opportunity to take the Renewal of Commitment.

The majority of couples at the Mass were celebrating ‘milestone marriages’, and the most popular amongst those was Golden Wedding, marked by 36 couples.

Archbishop Longley also had the honour of presenting a Papal Blessing to Maurice and Barbara Kelleher for their 70th wedding anniversary, which they celebrated on 28 February 2018. The couple travelled from Our Lady of the Assumption, Maryvale, to attend today’s Mass with family.

As love and marriage was the focus, there was much reflection from St Paul’s first letter to the Corinthians: “In short, there are three things that last: faith, hope and love; and the greatest of these is love.”

Archbishop Bernard also penned a special Homily for today’s Mass, in which he said: “As married couples you teach the rest of the Church what is meant by love…the Church needs the insights of married people.”

For the Archbishop’s homily: Mass of Thanksgiving for Married Life