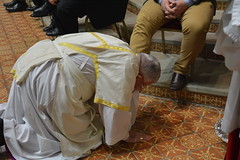 The Mass of the Lord’s Supper took place at churches across the Archdiocese this Thursday, 18 April.

The Rector of Oscott College, Fr David Oakley, seminarians and staff were also in attendance.

A key part of this Mass is the Washing of the Feet – a deeply symbolic ceremony which follows the Lord’s example in washing the apostles’ feet.

Archbishop Bernard, assisted by altar servers, knelt on the floor and washed and kissed the feet of six seminarians from Oscott, and six parishioners from the Cathedral.

As he moved along the row, the Archbishop paused briefly in front of each person and presented them with a gift of a rosary and special card.

Ahead of the service at St Chad’s a single bell tolled for seven minutes at 7pm in solidarity following the Notre Dame fire.