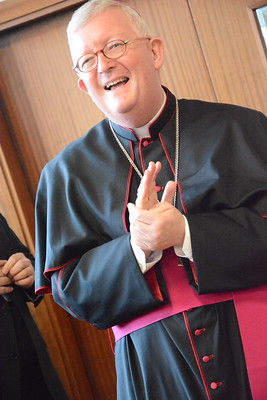 On Monday 9th December, the Solemnity of the Immaculate Conception, the Cathedral filled to celebrate the 10th anniversary of Archbishop Bernard’s installation as Archbishop of Birmingham.

Fr Dominic Cosslett, Archbishop’s secretary gave the homily, on the topic of the Immaculate Conception. He concluded “As our celebration today finds its place in these unfolding days of Advent, we are also mindful of having begun on the First Sunday of Advent, our ‘Year of the Word’ – The God who Speaks.

“In Mary, we have no better example who can teach us to make room in our hearts for the Word, to ponder on the things of God so that through the Word made flesh, whose coming draws near, we may be drawn into the life of God and into a deeper understanding of what His purpose for each one of us is.”

Bishop David McGough gave a special word of thanks to the Archbishop for his pastoral care of the diocese – noting that schedules are often blown out of the window when the Archbishop starts talking to people after Masses and events.

Following Mass, all were invited to the Grimshaw Room for celebratory nibbles and for the unveiling of the portrait of the Archbishop, painted by the late Michael Noakes.

General Election 2019 Message from the Catholic Bishops of England & Wales

This General Election is profoundly important to the United Kingdom. …More →