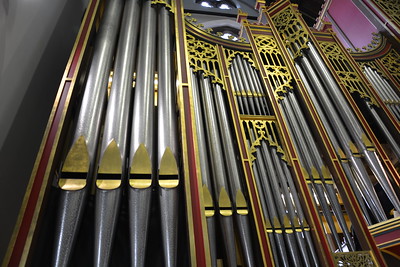 The magnificent organ at St Chad’s Cathedral is once again in tip-top condition following a major restoration project.

During the summer months the organ, considered one of the finest modern instruments in the country, underwent a major overhaul, including repairs and cleaning.

But it’s now back at its best and will be fully utilised at the forthcoming Carol Service on Sunday 22 December and during Christmas Masses.

Organ builders Nicholson & Co carried out the work, which cost just shy of £54,000.

The Cathedral Association donated £15,000 towards the project, with the balance being met through personal donations, other charitable trust grants and various fundraising musical events and concerts.

After 25 years of constant use, the organ had begun to show signs of wear and tear:
• The action had become very noisy
• Two of the large pedal pipes were collapsing
• There was a very noisy leak inside the organ caused by the failure of a small pressurised air chamber
• The “Swell Mixture” did not work when the humidity was low
• Sometimes, notes were “sticking”
• There were occasional murmurings on the “Swell” where leaks into the pipes caused notes to sound when they should not
• The balancier motors had started to fail due to ageing
• The whole instrument was filthy inside, compounding the mechanical shortcomings listed above

And so the decision was made to undertake the major restoration.

The organ was installed as part of the Cathedral’s 150th anniversary restoration and is the work of J. W. Walker & Sons, who were commissioned to build it at the end of 1990. The case and gallery were designed by David Graebe in late medieval style, with decoration by Gordon Foster.
It is in constant demand and is used extensively for teaching and masterclasses, and has been a particular inspiration for young organists at the Royal Birmingham Conservatoire.

The instrument has also featured on recordings by Professor David Saint, Henry Fairs and Paul Carr and has been heard on many radio and television broadcasts.

A report from Nicholson & Co stated: “In June and July 2019, we carried out a thorough cleaning and overhaul of the splendid 1993 III/40 J.W. Walker & Sons organ in St Chad’s Roman Catholic Cathedral, Birmingham.

“This acclaimed instrument receives extremely heavy usage, and is often used by organ students at the nearby Royal Birmingham Conservatoire.

“Our work has involved a thorough cleaning of all pipework, mechanism and the splendid Pugin-esque case, which was new in 1993.

“The very worn pedalboard has been re-pieced and restored, the similarly worn bench has been re-made with a new internal mechanism, and the action has been thoroughly regulated.

“The few collapsing reed basses have been repaired and strengthened, the schwimmer units have been adjusted, the upper boards have been lifted to lubricate the slides, the pipework has been thoroughly tuned, with the minimum necessary attention to regulation and speech.

“Unfortunately, during the process of restoration, we discovered a large crack in the Ventus Pipe Organ Blower which meant that we had to bring in a specialist company to effect the repair.

“However, with all the work now complete, the organ is ready for another 25 years’ reliable service.”

Professor David Saint, current organist and Director of Music at the cathedral, said: “We are all absolutely delighted with the newly refurbished organ and it is wonderful to have the instrument back in first-rate mechanical shape.

“The organ is in constant use and is a prominent feature of our beautiful cathedral.”

All are welcome to attend the Carol Service, which starts at 5pm on Sunday 22 December.

Organ recitals take place on the first Thursday of each month at 1.15pm, with the next one on Thursday 2 January, and there will be a Summer Organ Festival next August.