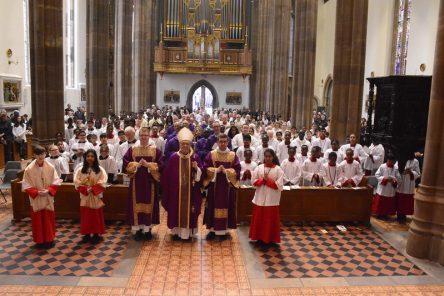 Hundreds of altar servers and their families from across the Archdiocese gathered on Saturday 7 March for the Guild of St Stephen Annual Mass of Thanksgiving.

Rt Revd Bishop David McGough celebrated the Mass, which was served by St. Mary and St Modwen, Burton-on-Trent. The gifts were presented by Our Lady of Lourdes Catholic Primary School, Yardley Wood.

The Guild of St Stephen is an International Organisation of Altar Servers founded in England in 1904 by Father Hamilton McDonald when he formed a Society of Altar Servers at the Convent of the Sacred Heart in London.

The objectives of the Guild:

Bishop David McGough said how wonderful it was to see so many altar servers from so many parishes gathered  in the Cathedral. He praised their work, adding that:

“It takes courage to stand out from the crowd, and so I thank you for standing out, and, by serving at the altar, giving a very public witness to your faith.”

He said that serving at the Mass rings us closer to Jesus:

“An altar server is one who serves, a servant if you want to put it that way.

“For Jesus serving was not so much a job to be done, as a whole way of life. Over and over again he described himself a servant:

‘I have not come to be served, but to serve and give my life for many.’

‘If any of you would be first, he must become the least, and the servant of all.'”

Bishop David concluded that: “Serving at Mass is wonderful preparation for life.

“Whatever we do, be it priest, teacher, doctor nurse, factory worker, farmer, father, mother, brother or sister, we will do it better because the Lord is with us.

“We will take the Lord we receive at Mass into everything we do.”

The Mass concluded with a period of adoration before the blessed sacrament.

The Archdiocese of Birmingham Guild of St Stephen is administered by the Diocesan Vocations Office.