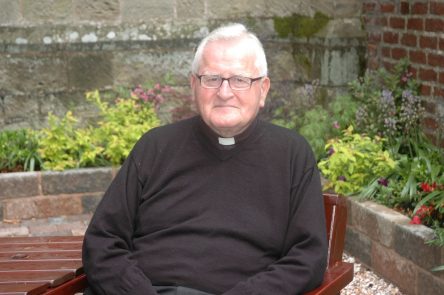 My first encounter with Bishop Leo McCartie was when I was ten years old, a new boy at Cotton College, and he was Captain of the School. We must have been on some work detail in the valley and I fell and cut my leg. He picked me up and carried me back up to the school. It was a steep track but he was fit, a very good rugger player.

After leaving Cotton and training for priesthood at St Mary’s College Oscott, he came back to the school as Prefect of Discipline. Later he was responsible for the RE teaching in the Archdiocese. When he used to be asked what part of Ireland he came from, his reply was always “Stoke-on-Trent” He was very proud of his upbringing.

In due course he was made Administrator (Dean) of St Chad’s Cathedral. During Canon Brian Withers’ time at St Chad’s I had been made welcome as a supply priest during my holidays from Cambridge and then from Cotton College. I wondered whether this would continue with the new Administrator, but it did and I enjoyed his company at St Chad’s for years. It was during his time at St Chad’s that he opened the crypt as a very well-run night shelter. Sadly, it had to be closed after some years because of a fire started by someone smoking.

Even when he became an auxiliary bishop and I became parish priest, he, with his sister Kathleen, continued to entertain me to Christmas lunch in his house in Olton. It always amused him that I brought my Christmas offerings in a bag with me, as I was not going to risk leaving them unattended at the presbytery in Solihull.

After he became Bishop of Northampton, we did not meet so often. But I do recall the interview with the local press on his arrival in his new diocese. It was suggested that he was a bit old to be put in charge of a diocese. His reply was: “If I was Bishop of Rome, I would be considered too young”.

My last meeting with him was last year at the Little Sisters in Harborne. I commented on the wonderful sense of serenity that always seemed to surround him. His wry reply was: “It may not last much longer, as I am beginning to have difficulty in reading”. May he rest in peace.