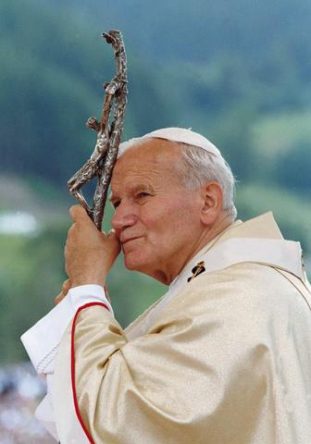 Before Pope Francis was Pope Benedict, and for the 27 years before that our Pope was John Paul the Second (JPII).
As with all Popes, he was an incredible human being and there are so many things about him that brought joy to my faith and which I would like to share with you.

In his youth, the future Polish Pope was an actor, a poet and a playwright, a footballer and a skier.

Growing up under a strict communist regime, he is thought to have played an influential part in the fall of the Berlin Wall and the opening up of Europe to equality for many people.
He lived to the age of 84 and during his time as Pope was shot and wounded, had cancer and then developed Parkinson’s Disease. One of the difficulties with living to that age and through so much means that he is often portrayed as frail and old.
But I had the privilege of seeing him many times and meeting him a few times when I was in formation for the priesthood in Rome. Now he is a saint.

He was 58 when he was elected Pope. far from being frail, he was tall and upright and dynamic.
He came to England and to Coventry in 1982. Ask your grandparents about Pentecost Sunday and their memories of the day.

Take the time to look up some of the following moments in his life:

Holding a Koala;
Wearing U2 Bono’s glasses
Pulling faces
Kneeling and kissing the ground (which he did whenever he visited a country of the world)

The greatest joy that Pope John Paul brought to the world was starting the great World Youth Gatherings. Hundreds of thousands, sometimes millions of young adults from around the world descending on a particular country and celebrating their Catholic Faith with the Pope. They have been life-changing events for so many people.

Why does this bring me joy? Well, I attended World Youth Day in Paris in 1997 soon after I was ordained a priest. Then, as a Parish Priest, I encouraged ten young people to attend World Youth Day in Sydney and then another ten to travel to World Youth Day in Madrid.
These are amazing festivals, filled with joy and hope, a sharing of cultures and friendships that last a lifetime.

It was Pope John Paul taking seriously Jesus’ words to St Peter: I pray for you that your faith will not fail you and that when you have repented, you may return to strengthen your brothers and sisters.
Pope John Paul loved his faith, he loved the Church and, as the successor of St Peter, he carried the message of the Good News of Jesus Christ to the ends of the earth…literally.
Let me ask you to search for the song ‘Jesus Christ, you are my life’ and look at some of the footage of St John Paul II.

I hope you can just experience something of what he brought to the world: the Joy of the Gospel.
And I hope that you might get to World Youth Day in the years ahead!